Batting in the Top of the South

Debs Martin started it all with her report of sighting bats at Pelorus Bridge in 2005. Since then local interest in bats has just kept on growing. Last year, I began work for the Top of the South Region of Forest and Bird Society developing a bat survey programme for the area funded by T-Gear charitable trust. Working with local Forest and Bird volunteers, I located long-tailed bats in the Aorere Valley, Golden Bay; the Skeet Valley, Motueka; and the throughout the Rai and Pelorus catchments.

This year, a grant from the Lotteries Grant Board, Environment & Heritage Committee has allowed us to expand the project, to go beyond survey for bats and study a local bat population to see how they can be helped. Survey work will continue, but it will be undertaken by local volunteers with a bit of help from me. Chris Petyt is leading bat surveys currently underway in Golden Bay. Surveys are planned for the St Arnaud area in the New Year; Helen Campbell will be co-ordinating this work. If you are interested in helping either of these surveys please contact them (details below). 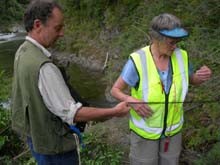 Brian and Julie removing debris from a mist-net

I’m concentrating on studying the long-tailed bat population at Pelorus Bridge. Although we found bats throughout the Rai and Pelorus catchments, the main concentration was at Pelorus Bridge where it all started. I intend to catch a sample of bats in this area and attach miniature radio-transmitters to them. Following release, the radio-tagged bats will be tracked to their daytime colonial roosts. Once colonial roost areas have been found, population sizes will be determined by video surveillance of roost departures. The overall health and productivity of the population will be assessed using individual details of all bats handled. Although long-tailed bats usually range over wide areas their roosting areas are relatively small areas of forest, where they roost in cavities in old trees. These roosting areas are crucial to the continued survival of long-tailed bat populations. Predator control in these roosting areas is likely to be the most effective method for helping the bats. But first we have to find the roosts. 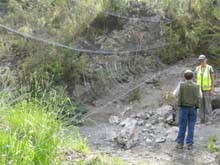 Progress towards catching and radio-tagging a sample of bats has been painfully slow. Long-tailed bats hibernate during winter, so we had to wait until mid-October to begin attempts to catch bats for radio-tagging. At this time, the bats were foraging inside the forest, where it’s warmer at night. We erected mist-nets in the forest in areas used by the bats. Unfortunately, after three nights at the nets it was obvious the bats had already moved on by the time we had the nets up. At the start of November with warmer nights the bats were foraging outside the forest, so we abandoned our attempts to catch bats in the forest. There were large numbers foraging high above the street-lamps at each end of the Pelorus River road bridge almost every night. We placed mist-net and harp-traps 20 metres high in the forest near the lamps, but frustratingly the bats didn’t come down to them. Once again we failed to catch bats. For a while, I considered trailing a mist net behind a helium blimp to trawl the skies above the street lamps for bats. Fortunately, we didn’t need to go to this extreme measure: we discovered an area in the Pelorus River bed where there were large numbers of bats on most nights. However, so far our attempts to catch the bats in this area have been frustrated by the weather. You can’t use mist net on windy nights or wet nights and the bats don’t forage on cold nights. We need a calm, dry and warm night; and there haven’t been many of them recently. It’s been doubly frustrating listening to the bats echolocation calls as they fly past on windy nights, when we couldn’t use the mist-nets, and then sitting beside the nets for hours on calm cold nights without any bats passing by. 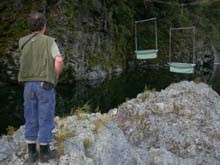 We haven’t caught any bats yet, but we are going to keep on trying. With all the practice we have had the team (Julie McLintock, Pam McConnell and Lyneke Onderwater) is now proficient in erecting mist-nets, canopy-nets and harp-traps. I am indebted to these three: their enthusiasm has kept me going through several batless nights.