The very rare Canterbury Plains tree daisy population was boosted by the discovery of new plants on the north bank of the Rakaia River at Te Pirita, on land administered by Land Information New Zealand (LINZ).

Jason Butt, restoration ecologist and Canterbury Botanical Society Vice-Chair, was travelling along the Anglers’ access track when his botanical-eye picked out a small shrub of Canterbury Plains tree daisy (Olearia adenocarpa). “I was taken aback” recounted Jason, “it was the botanical equivalent of spotting a takahe walking by; these shrubs are that rare”.

There are less than 700 Canterbury Plains tree daisy’s remaining in the wild. The largest number are scattered through the dry, stony paddocks around West Melton, and a few gown on Great Island, at Rakaia. They are severely threatened by browsing, and most are chewing down by rabbits and hares. They have the ability to resprout multiple branches after being buried by gravel deposited by floods from the big braided rivers. It is one of eight rare tree daisies that are all only found in New Zealand. All tree daisies are important host plants for moths and butterflies.

Jason sent a small branch to Landcare where Dr Peter Heenan confirmed that it was Canterbury Plains tree daisy. This new population will help maintain the genetic diversity of what is now a natural small population.

It was retired botanist Dr Brian Molloy who first recognised this new species in 2004. It created considerable conservation interest to find a new plant species so close to a major city. It gave Dr Molloy great pleasure to see the natural range of the species extend to Te Pirita. At most sites scientists have had to cage plants to stop browsing and allow the plants to flower and fruit. Scientist have experimented with new techniques to establish plants in its preferred arid, stony soils.

The Canterbury Botanical Society visited the 135 hectare river bed near Te Pirita in September 2015 to see the newly discovered tree daisies, accompanied by Dr Molloy. The wide flat plain has scattered kowhai trees, matagouri and extensive open areas. Botanical Society members looked closely through the carpet of woolly moss and found other small rare plants: prickly couch and leafless pōhuehue. These plants are hosts to their own species of moths or butterflies. Cages were constructed around two Canterbury Plains tree daisy plants to keep the hare and rabbits at bay.

Brian Patrick caught one of the moths seen flying on the day. He later reported that it is an early-spring emerging species of matagouri – indigenous grasslands of Canterbury, which is nowadays not well known as these sorts of communities are now rare. The species is effectively immobile as the female with slightly shortened wings is reluctant to fly. This species is truly indicative of these original dry grasslands.

Jason would like to see the area secured and managed for the dryland plants and animals. “It is the largest area of natural river terrace left on the Canterbury Plains and our last chance to see what first European settlers saw when they first travelled over large areas of the Plains”.

Rare and Threatened plants at The Te Pirita site 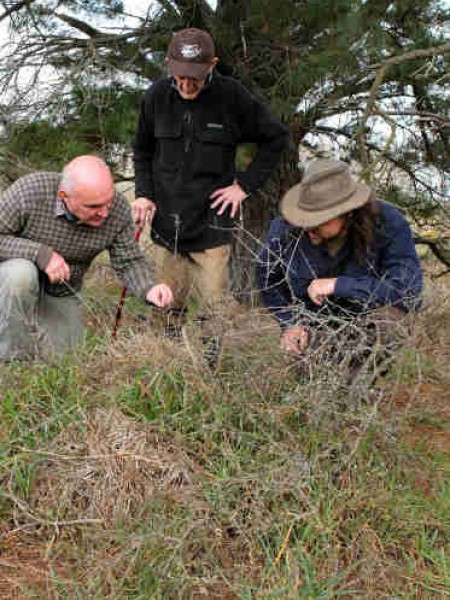