Death by 1000 waves for rare kānuka 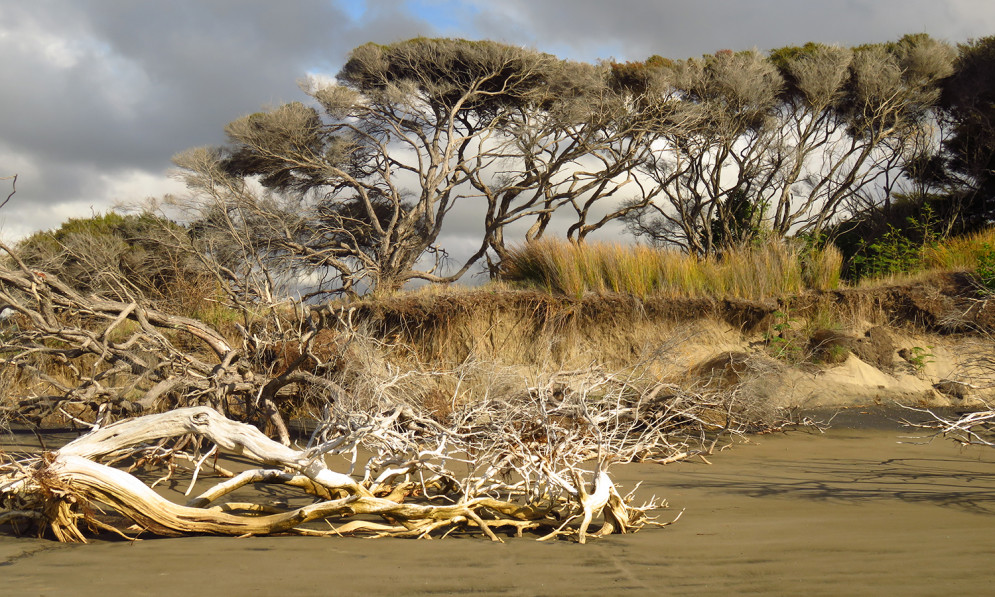 Time is running out for the Bay of Plenty kānuka on Whangakopikopiko Island. Photo: Mike Collins

Climate change is likely to see the demise of a rare species of kānuka on a tiny island in the Bay of Plenty, but local plant lovers are determined to keep it alive on the mainland. By Meg Collins*

The last four years of very high king tides, storm surges, and strong northerly winds has caused massive erosion on Whangakopikopiko, a narrow 16ha banana-shaped island at the eastern end of Ohiwa Harbour, east of Whakatane, in the Bay of Plenty.

Whangakopikopiko, which is a Department of Conservation Wildlife Management Reserve, is home to mātātā (fernbirds) and provides nesting spots for tūturiwhatu (New Zealand dotterel). It is also an important high-tide roost for the wader population in the harbour, especially the kuaka (Eastern bar-tailed godwits), who spend the summer here. 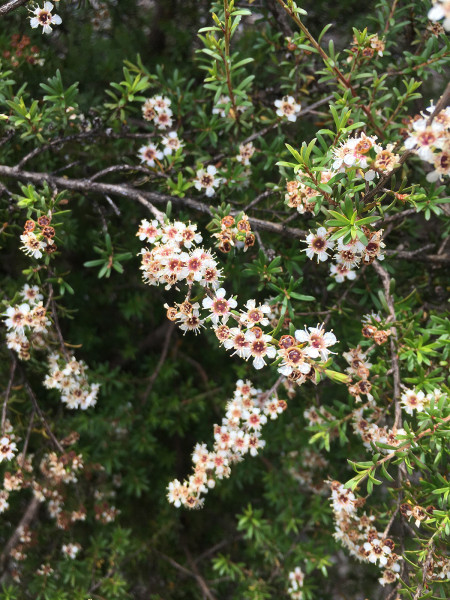 On the western end of this island is one of only two main stands of the rare and threatened Bay of Plenty kānuka (Kunzea toelkenii), which has a conservation status of nationally critical.

Sadly, following the storms of the last few years, only half of this small population of special kānuka remains, with the rest lying stripped and derelict on the beach. There are fears the remaining trees will gradually be lost–death by 1000 waves as a result of climate change.

In 1985, Sarah Beadel, of Wildlands Consultants, first identified that this particular kānuka was different from the other species when she was surveying the sand dunes at Thornton, west of Whakatane.

She noticed it has numerous highly contorted and spiralled trunks, many very twisted, and the branches are often suckered. It has a tendency to droop and is found only in sandy conditions. 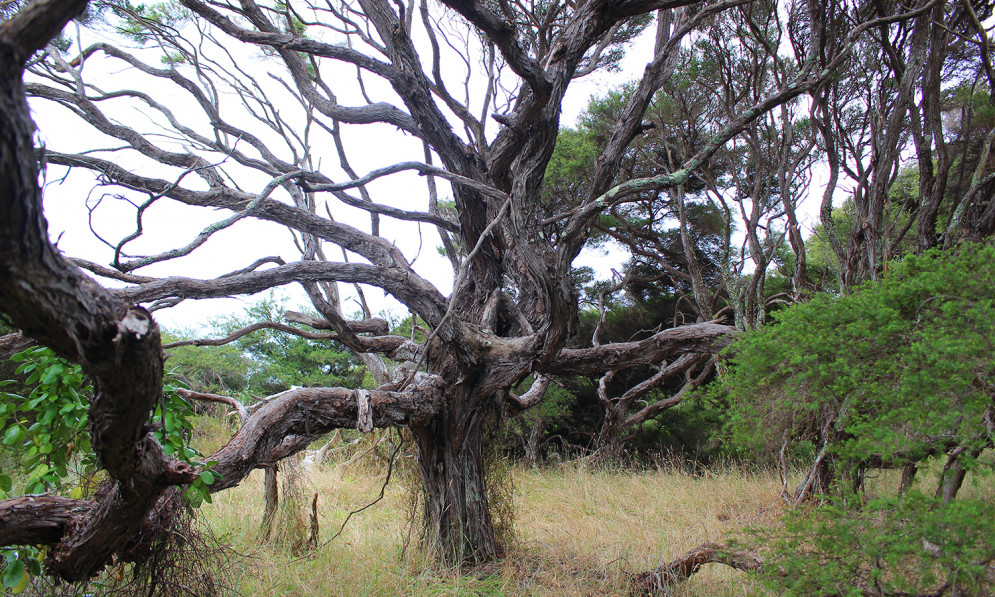 This unusual and extremely rare kānuka is characterised by numerous twisted branches.

It was not until 2013, after a great deal of research by Peter de Lange, that this species was given its own name of Kunzea toelkenii, or Bay of Plenty kānuka.

The Thornton population is the most extensive. However, there are also a few trees remaining on the harbour side of the Ohope spit and, of course, the trees on Whangakopikopiko.

An aerial photo of Whangakopikopiko in 1944 shows there were no trees at all. The kānuka seed must have been blown over from the few trees on Ohope Spit, muses Willie Shaw, an ecologist and passionate observer of Ohiwa Harbour.

Recognising the trees were in danger, a special project with Waiotahe School was set up with help from the Ohiwa Reserves Care Group. For a school project, Jo Bonner, from Coastlands Plant Nursery, helped students collect and plant seeds to produce seedlings from the kānuka.

In August 2006, more than 100 seedlings were planted by the students. Some of these trees are now more than 2m tall on the southern side of Whangakopikopiko. Sadly, most of the trees on the northern coast have succumbed to the waves.

The future is not looking bright for the remaining natural stand on this tiny island. But on the mainland things are looking up.

Bay of Plenty kānuka is being re-introduced thanks to Coastcare and other volunteer-led native planting projects on public and private land around the Ohiwa Harbour. This work is being supported by two local nurseries, Coastlands Plant Nursery and Rural Revegetation Services, which are propagating the seed.

*Writer Meg Collins, of Ohiwa, is a long-time Forest& Bird member, former chair of our Eastern Bay of Plenty branch, and co-convenor of the Ohiwa Reserves Care Group with her husband Mike. Meg is donating the fee for this article to help pay for an information panel and metal labels for Ohiwa Care Group’s rare plant collection.

A version of this article was first published in Forest & Bird magazine, Winter 2020.