New Zealand’s reputation as 100% Pure has long been the cornerstone of our national identity and international selling point.

But over the last few years, we’ve witnessed the increasing erosion of our natural treasures and the realisation that 100% Pure New Zealand is not 100% true.

New Zealanders have borne attacks on their national parks from mining, greater land intensification and the continual deterioration of our lakes and rivers. And in 2012, the threats to our environment escalated as we witnessed moves to wrench out the heart of the Resource Management Act.

The good news is that thanks to the passion and commitment of staff, members and supporters, Forest & Bird generated positive changes that will benefit the environment for generations to come.

This year we celebrated victories after lengthy court battles over the wild Mokihinui River, West Coast wetlands and Whakatane’s Kohi Point. We were also the ‘voice for nature’ on collaborative working groups and mapping a sustainable future for New Zealand’s waterways and the Mackenzie Country.

With 80,000 supporters across 50 branches, we also made a huge contribution on the ground. Forest & Bird members rolled up their sleeves to plant over 200,000 plants this year, survey birds, propagate native seedlings, write submissions, hold public meetings, and set and monitor over 10,000 predator traps.

We also spoke to the next generation through our Kiwi Conservation Club. Over 6000 young New Zealanders were given the opportunity to discover, engage and actively protect their natural heritage.

Fighting for conservation can be a tough and drawn-out battle. But it is heartening to know that what we do today is planting the seeds for a better New Zealand, tomorrow. 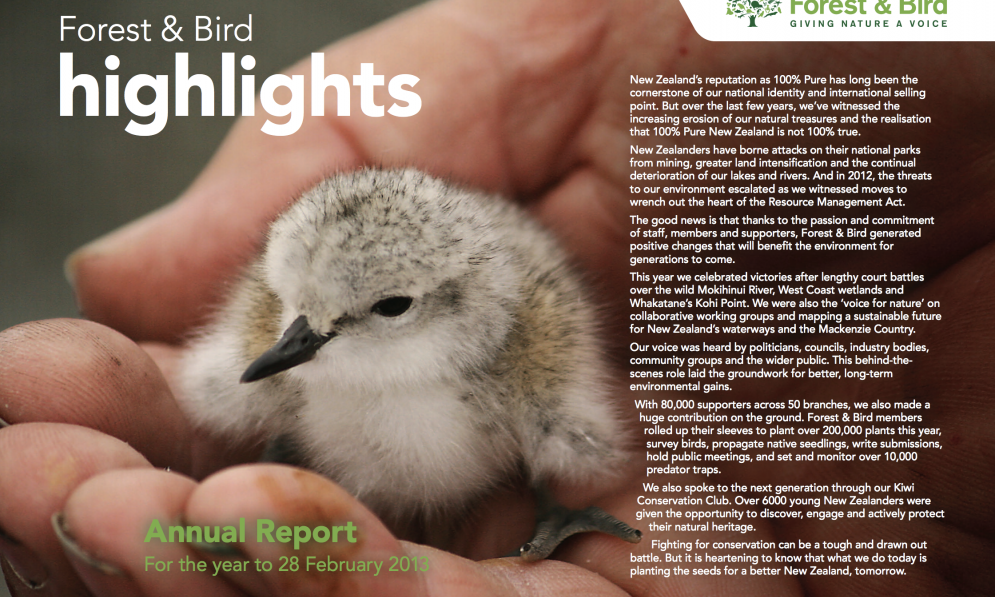