New Zealand’s longest-running conservation magazine has just been added to the National Library’s Papers Past website.

The first two decades of Forest & Bird’s nearly 100-year-old magazine are now available online, spanning the period before the Great Depression to the end of World War II (1924-1945).

It’s the first time a conservation magazine has featured on Papers Past and it’s fully searchable making it a valuable resource for anyone interested in early 20th Century environmental history. 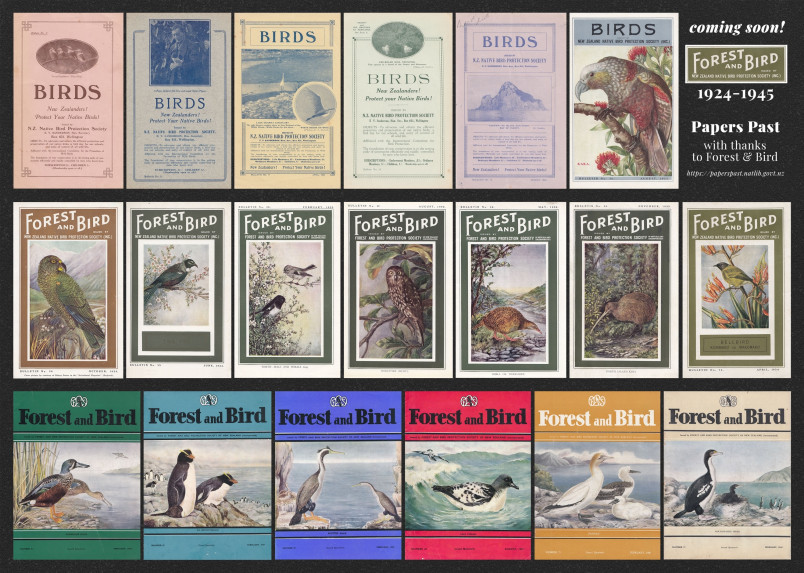 “Forest & Bird’s magazine has been a strong voice for nature for nearly a century,” says Chief Executive Kevin Hague.

“These stories published from the 1920s onwards were written by some of the leading lights in conservation in New Zealand and around the world. They bear witness to tipping points in our country’s rich environmental history and we hope that by making them publicly available it will help shed light on their passion and achievements.”

Forest & Bird magazine has been the flagship publication of the Royal Forest and Bird Protection Society of New Zealand for nearly 100 years. Founded by Captain “Val” Sanderson in 1923, the society started publishing a magazine in 1924 and continued without a break through wars, recessions, and the arrival of digital age.

The first issue of the magazine started with a thundering command from entomologist JG Myers: “It is the duty of every New Zealander to do his best towards the permanent preservation of those natural beauties with which this country is so lavishly endowed.”

They were worried about the ongoing decline in native birds caused by forest destruction, the introduction of predators, and the impact of collectors and hunters. In its first decades, its members also campaigned for the establishment of national parks, the development of island sanctuaries and for an end to the Government’s kea bounty.

The Papers Past project has been made possible by a generous partnership with the National Library of New Zealand/Te Puna Mātauranga o Aotearoa. Forest & Bird is currently working to make its entire back catalogue of magazines available to the public in time for its Centennial in 2023.

Images: Screenshots and covers of Forest & Bird on Papers Past are available here

BACKGROUND INFORMATION
The Society’s magazine started as a newsletter from Sanderson to members in 1923. It was one to two pages in length and sent out as a circular letter. These letters evolved into a magazine called Birds, published from September 1924.

Birds was published twice a year until 1928, when it changed to three times a year. In October 1933 the name of the magazine was changed to Forest and Bird, to better reflect the importance of retaining the bush in order to save the birds. In 1935 the decision was made to publish quarterly, in February, May, August and November, a pattern that is still followed today.

From the earliest issues, the magazine included articles from prominent overseas writers on environmental matters, linking the New Zealand Society to other conservation movements, particularly in Britain and the United States. Many New Zealand scientists were members of the Society, such as ornithologist Robert A Falla, and botanists Bernard C Aston and Leonard Cockayne, and they contributed many interesting articles to the magazine.

From August 1933 onwards the cover of Forest and Bird featured the stunning bird illustrations of Lily Daff (1885-1945). Daff had been commissioned by the Society to produce a series of paintings showing New Zealand birds in 1932. These were used on the cover of the magazine, as well as in two Society publications that were distributed to schools, New Zealand Forest-Inhabiting Birds (1933) and New Zealand Sea and Shore Birds (1940). Daff’s original works are now held in the Alexander Turnbull Library.