Liz Carter has been awarded Forest & Bird’s prestigious Old Blue for outstanding service to the Napier branch, including more than three decades as a committee member. 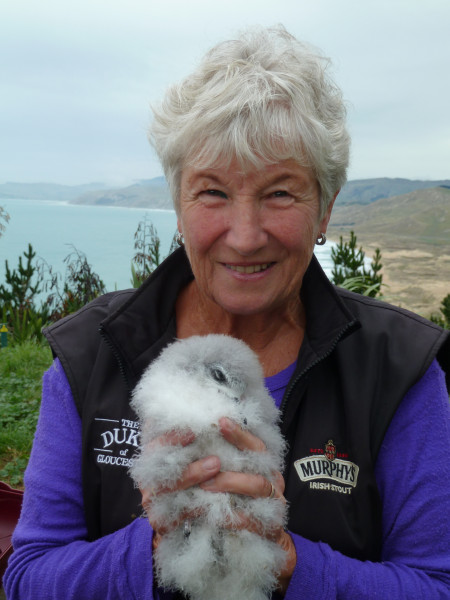 During that time Liz has done everything from editing the branch newsletter for 10 years, organising field trips for over three decades, hosting committee meetings and working on conservation projects.

“Liz’s loyalty, knowledge and ethics are unsurpassed and she is a cheerful and caring person who is highly regarded by the Napier branch members,” David Belcher said.

Former branch chair Neil Eagles added that Liz played a vital role for the branch in many of its activities.

“Part of it is due to her character, she is a person who everybody wants to work with. We’re pleased she’s got some reward for all the years she’s put in, we all love her to bits,” he said.

Liz was brought up on a farm in the Tararua district, and spent a lot of time playing in the adjoining bush with her siblings.

As well as learning to love the bush, Liz’s rural experience gave her an understanding of farming and farmers. This proved useful for working with the farming sector and winning the permission of land owners to go on their farms for branch field trips.

“I tell people when I go out to meet a farmer or to do a recce for a trip, I usually put my lipstick on, take a sticky bun for their morning tea and a big smile. I’ve only ever had one farmer refuse permission.”

She said she puts her hand up when there’s work to be done and this included getting her bus driver’s licence for a few years from the mid-1990s for branch trips.

“Everyone has been very supportive to me over the years and I appreciate all the help and support the members have given me.  We have a wonderful group of members and some of them are like family to me.

“I have enjoyed being able to contribute to the branch over the years. Forest & Bird’s role as the voice of nature is crucial for protecting our environment.”

The Old Blue is awarded annually by New Zealand’s largest independent conservation organisation to people who have made an outstanding contribution to Forest & Bird or to the organisation’s conservation goals.