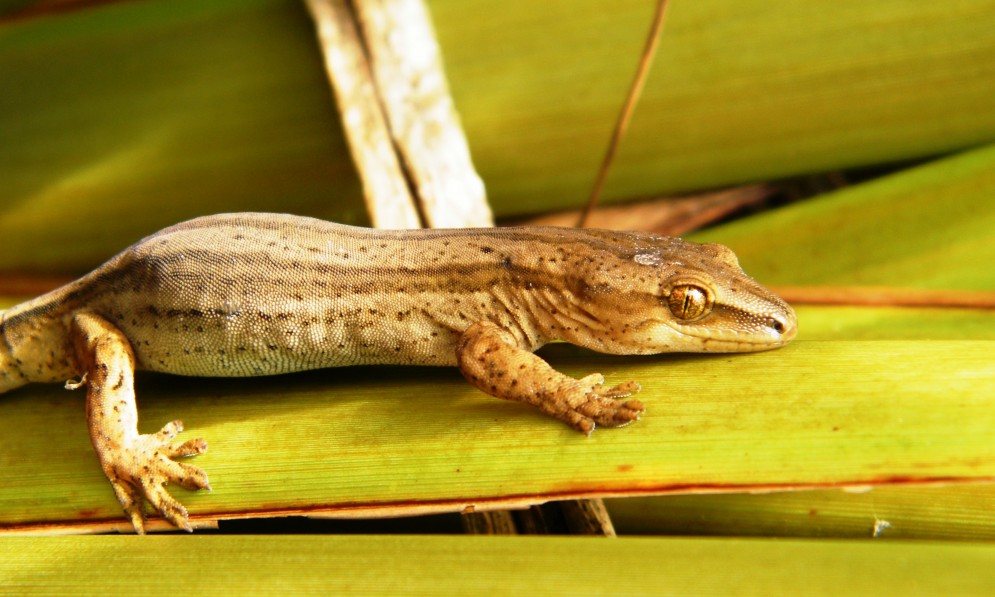 I first came face to face with a moko mangaeka while helping my Massey University research supervisor Doug Armstrong carry out a hihi bird survey at Bushy Park Tarapuruhi. 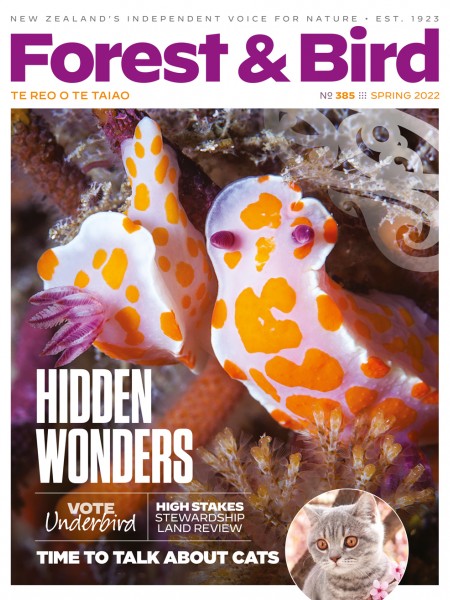 Doug stopped in front of a large pile of fencing material with a piece of corrugated iron on top. He lifted the corrugated iron, and there were two beautiful copper-coloured goldstripe geckos (Woodworthia chrysosiretica) just minding their own business.

He carefully picked up one to show me. I cried. I had never seen a gecko before, and they were just stunning little creatures. It was definitely a fan-girl moment!

Doug was shocked I had such a strong reaction and said that he was looking for someone to carry out research on the Bushy Park Tarapuruhi population.

The goldstripe gecko is a threatened endemic New Zealand species and is listed as “at risk”. Threats to this species include habitat loss and degradation, introduced predators such as rats, stoats, cats, and mice, and chemical sprays such as herbicide.

Although goldstripe geckos were known to be present in the sanctuary, more have been found there over the past two years.

I jumped at the chance to do some research in my own backyard. I had just won the JP Skipworth scholarship from Massey University, which would help fund my study. Everything just fell into place.

The aim of my research is to develop a low-impact population-monitoring programme that will obtain useful abundance and distribution data for the goldstripe gecko population in Bushy Park Tarapuruhi.

The tubes are made from 50mm Alkathene pipe and fitted with pre-inked black Trakka cards and baited with a piece of tinned pear.

This method has been used to successfully detect goldstripe geckos and has been trialled in other lizard monitoring projects around the country, with promising results. 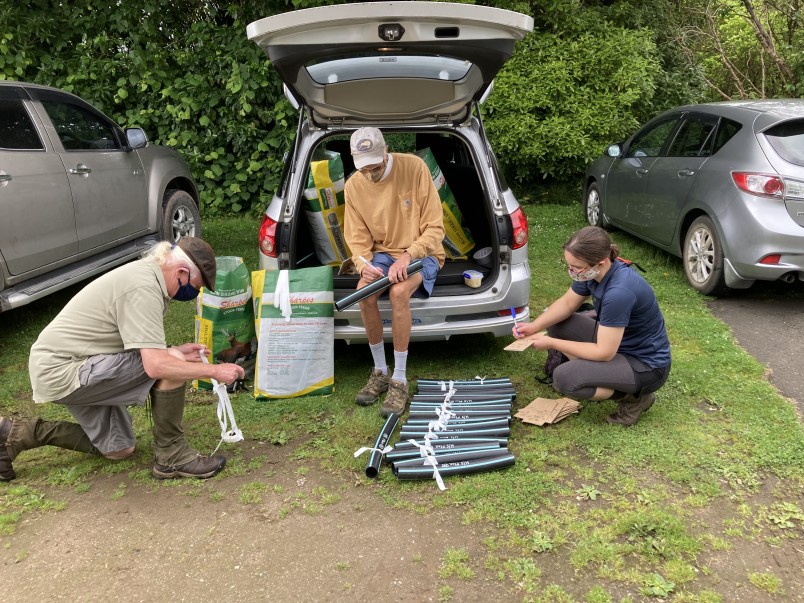 We put them in likely goldstripe gecko microhabitats, including harakeke bushes, forest epiphytes, hollow/rotting logs, and among rocks and leaf litter. They also went along the predator-free fence that surrounds Bushy Park. 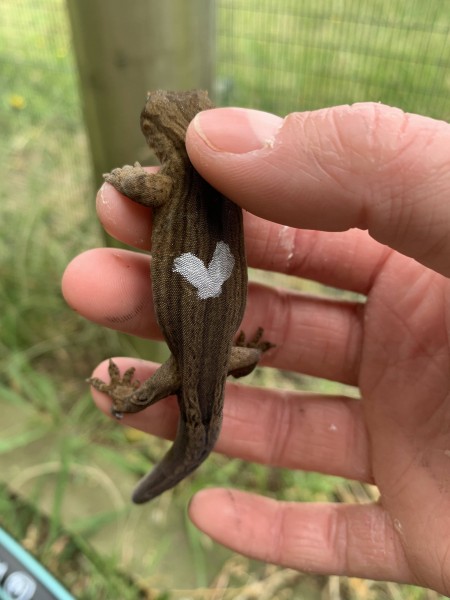 The Trakka cards enabled me to determine whether the goldstripes were present in that location. The sanctuary is also home to forest geckos and northern grass skinks.

Then I went out hand-searching for them. Goldstripe geckos are cathemeral, which means they are active at different times during the day and the night.

I searched day and night in the locations that had goldstripe footprints left on the Trakka cards. When I found one, I had to be quick to catch it!

I measured and weighed the gecko and marked it with a unique symbol using a non-toxic silver marker. I also took photos of any unusual markings that could be used to identify the individual from a distance. 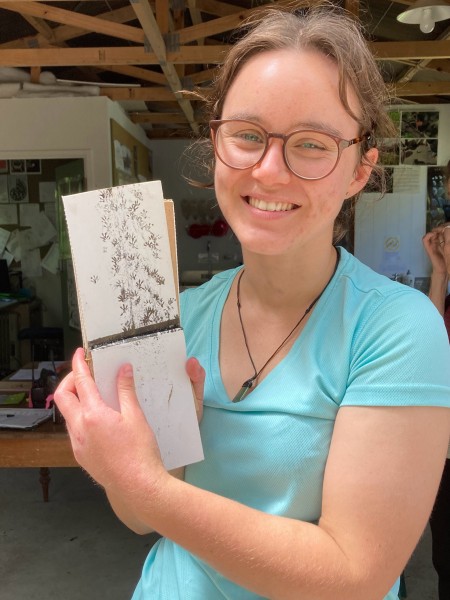 The geckos were also sexed, and I determined whether the females were gravid (pregnant). Goldstripe females give birth to live young (usually twins) around late February to early March.

I loved every minute of my research and am very grateful to Mandy Brooke, Dale Pullen, and the volunteer team at Bushy Park Tarapuruhi.

I’m currently part way through my data analysis and writing, and hope to have my thesis completed by February 2023.

Caitlyn Friedel is studying for a Master’s in Conservation Biology at Massey University. 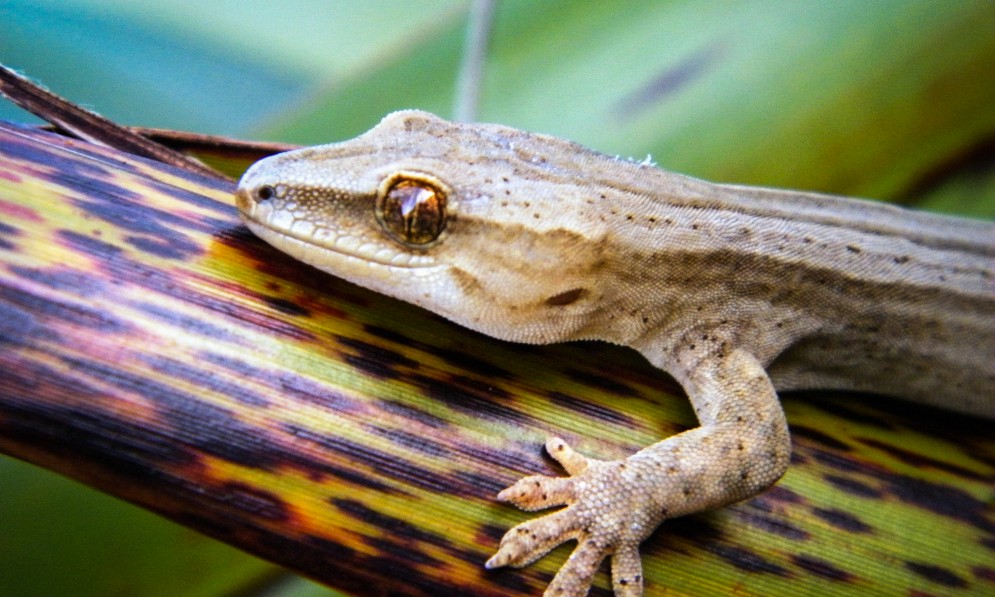 Goldstripe geckos are only found in the North Island, and they have only been recognised as a distinct separate species since 1980.

New populations continue to be discovered, especially in Taranaki, which makes the region particularly important for its conservation. They also live on the pest-free islands of Mana and Kāpiti near Wellington.

Forest & Bird’s Bushy Park Tarapuruhi Sanctuary is located 5km south of Taranaki and, being located in the Whanganui-Manawatū region, is the only known mainland population outside Taranaki.

You can help encourage skinks and geckos in your garden by planting native vegetation such as flax to enhance habitat for geckos.

If you want to support Forest & Bird’s conservation work at Bushy Park Tarapuruhi, please make a donation at www.forestandbird.org.nz/donate