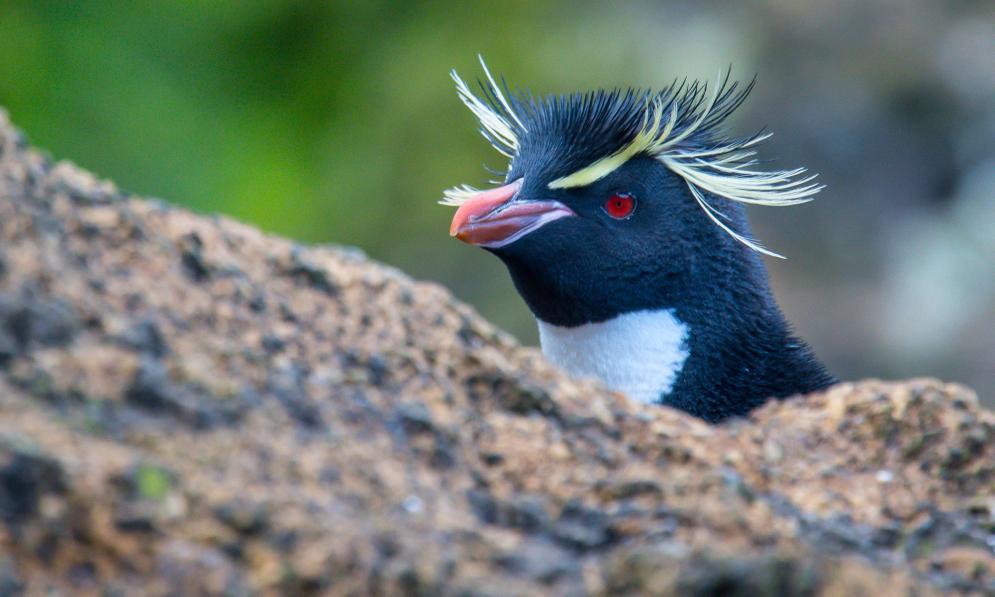 A study by PhD candidate Kyle Morrison has found that rockhopper penguins could be casualties of changes in climate.

Kyle, of Wellington, studied the eastern sub-species of southern rockhopper penguins on sub-Antarctic Campbell Island. The Campbell population declined by an alarming 94 per cent between 1942 and 1984, and other populations at the sub-Antarctic Auckland and Antipodes islands also dropped. The Department of Conservation ranks them as nationally critical.

Rockhopper penguins are top predators that roam widely so they are a biological indicator of changes to the marine ecosystem. Their widespread and dramatic population declines signal major changes happening in the Southern Ocean. The leading hypothesis to explain the species’ rapid decline is that global warming of the oceans has altered the amount or availability of the penguins’ food supply, resulting in poor reproductive success or higher mortality rates of juveniles or adults.

In the past 30 years the global population of the southern rockhopper penguin (Eudyptes chrysocome) has declined by 30–55 per cent, resulting in a global threat ranking of vulnerable. Campbell Island, New Zealand’s southern-most sub-Antarctic territory, had the world’s largest population of the eastern sub-species (E. c. filholi) of southern rockhopper penguin until the dramatic decline between 1942 and 1984. There is international concern for this species as the rate of decline at other colonies may have accelerated in recent years.

Kyle and colleagues at NIWA and Massey University used digital imagery analysis software to count penguins and compare colony area in photographs of Campbell Island’s seven largest rockhopper colonies. They estimated that the population declined by 21.8 per cent from 1984 to 2012, from 42,528 to 33,239 breeding pairs. This represents an annual percentage rate of decline of 0.8 per cent, considerably slower than the decline of 2.2 per cent per year estimated from 1942 to 1984.

The recent decline appears to have been from 1984 to 1996, with most colonies being stable or increasing from 1996 to 2012. In the latter period sea-surface temperatures were cooler and less variable than during the period of decline, suggesting increased marine productivity and food availability resulted in the recent positive trend.

An exception is the colony in Penguin Bay, which declined by 60 per cent from 1984 to 2012. Kyle’s research identified high predation rates as the likely explanation for the continued decline at Penguin Bay. Brown skuas killed or scavenged eggs and penguin chicks.

Insufficient food at sea is still probably the main cause of the overall population decline. The body masses of adults measured at each stage of breeding are generally lower than at colonies elsewhere in the Southern Ocean, indicating that poor foraging conditions are probably lowering reproductive success and survival rates.

Funding from the JS Watson Trust paid for stable isotope analysis of penguin blood samples to investigate how diet quality influences chick growth. This research tested the hypothesis that a higher-trophic level diet, consisting of more fish and squid/octopus than krill, would result in adults and chicks of greater body mass. In contrast, the results revealed that chicks grew faster in a year when females fed them more krill.

Following an autumn when sea-surface temperatures around Campbell Island were especially cold and a spring when they were warmer than normal, breeding penguins were of lower body mass and their chicks grew more slowly when being fed higher-trophic level prey less often. Small penguin chicks are less likely to survive to recruit into the breeding population.

This pattern provides strong evidence that rockhopper penguins are vulnerable to climate variability affecting the quantity and quality of their food supply at Campbell Island. Kyle’s study has provided new information vital to an understanding of the penguins’ ecology and population viability in a changing climate.