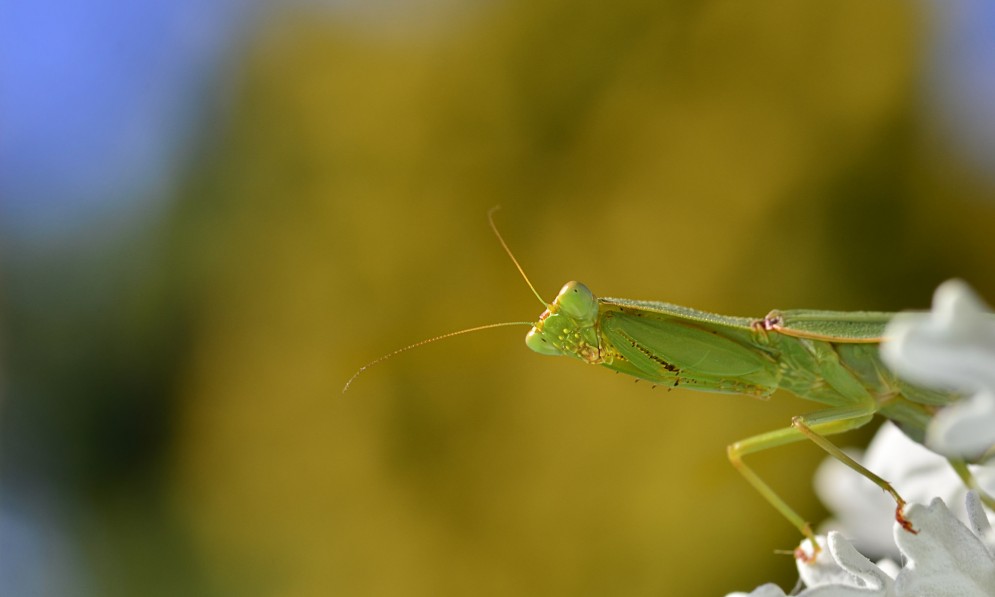 Take a close look at the praying mantises in your garden. They may not be the Godzone insects you think they are, as Graeme Hill writes.

If you ever admired a praying mantis before 1978, it was guaranteed to be our native species (Orthodera novaezealandiae).

Then one day, around the time of the Nambassa music festival and Bruce Beetham winning a seat for the Social Credit Party, the South African mantis (Miomantis caffra) established itself in New Zealand.

Perhaps it was a lone egg-case on an immigrant’s deck chair or attached to Sid Going’s rugby boots. However it happened, the Springbok mantis has done very well here ever since, especially in the north and, alarmingly, to the detriment of our own native mantis. It seems our precious New Zealander is being pushed out.

Any mantis is clearly a thing of wonder and beauty.

What marvellous creatures they are. It is the only insect, to my knowledge, that seems to address you with its engaging turn of the head as if to say, “And ... you are?”

These charms are shared by the Springbok and hence, like the proverbial wolf in sheep’s clothing, it has proliferated pretty much unmolested. If it was perchance a 5cm-long red cockroach or a biting fly, alarm bells would have been ringing long and loud since Nambassa.

To most people, a mantis is a mantis is a mantis, but it’s not. Knowing one from the other may be the best first measure to help our native version persist against this green and gold tide. The differences aren’t glaringly obvious so the observation of the New Zealand mantis’s decline has until recently been only anecdotal from those few who can, or care to, discern between the two species.

Picking between the two is easy once you know, and you’ll never mistake one for the other again.

Our mantis is always bright green. It has a wide, flat thorax (the long collar between the abdomen and the head). Most distinctively, the adult carries a purple dot on the inside of each of its grasping forelegs, or forearms if you like. If you see the purple spot, you’ve got yourself a native.

It’s the clincher. In general, our mantis, at least to me, seems softer and slightly iridescent. It has a dewy, lush look to it. The Springbok has the opposite.

The Springbok mantis can be a range of colours from brown to bright green. They can be exceedingly skinny, but are always distinctively skinny in that bit behind the head, giving them a classic hammerhead appearance. The egg-laden female’s abdomen can be quite grotesquely inflated ahead of laying down her egg-case. The egg-case itself is another big difference between the two.

The New Zealand mantis egg-case, from which 20 or so fully formed but tiny critters will emerge in spring, is a tidiest piece of insect architecture. It is oval, with an upper surface showing delicately wavy figures-of-eight, a pattern much like those fancy collars that Queen Elizabeth I and Sir Walter Raleigh wore. They are usually brown.

The Springbok egg-case is altogether a very different affair. It’s a puffy-white, rather untidy, oblong pavlova – a meringue with pointed ends and frequently found firmly glued into crevasses and corners of wood and concrete. If you feel like it, take a look in your crawlspace or under your house. You may be surprised by how many of these Doctor Who cyberman pods you’ll see, and it may give you some idea of what our lovely native is up against.

So, exactly how is the Springbok mantis succeeding in this ethnic cleansing? One factor is, of course, simple niche takeover. They both compete for very similar resources and it only takes a little pressure for numbers to accumulate and take effect. The Springbok breeds better.

Thanks to a couple of people who’ve taken notice of the declining numbers and have cared enough to look into it seriously, we now have a few answers, and they are peculiar findings indeed.

University of Auckland masters student Murray Fea and entomologist Dr Greg Holwell have found that the male New Zealand mantis cannot discern between the female South African and his natural mate, and there is evidence that they even prefer the South African female, the rotters!

It’s all about smell. He will attempt to mate with the South African but in doing so either wastes his issue, Old Testament Onan-style, but it is more likely that his romantic forays will stop right there due to an infamous habit of the female Miomantis caffra – cannibalism.

He gets eaten in flagrante delicto for his mistake. The New Zealand female does not cannibalise her suitor. These factors compounded upon each other are like throwing loaded dice. Over time – and quite a short time – the advantage has shifted and is shifting every season significantly to the Springbok.

The range of the Springbok mantis seems to be limited by temperature gradients so those of you reading this in the real south may feel safe for now. Recently the South Africans have been reaching high densities in Nelson and, worryingly, have been recorded in Christchurch.

What can we do to help our lovely fresh-green and purple-spotted mantis? Most people would understandably recoil from killing such endearing insects, yet we have military-style operations to systematically kill cute possums and stoats and ferrets and rats and cats.

All those programmes are worthy and the science is in. It’s the best approach.

I’ve been cleaning out the Springboks and especially their egg-cases and, after 10 years of no native sightings whatsoever, I’ve had visits from three native mantises in the past two years. I cannot connect cause and effect with any surety, but maybe a little citizen-based pest control can make a difference.

Perhaps we’re not just shovelling water with a pitchfork. For the sake of our natives, it’s always worth a go.

Most importantly I think this is a salutary lesson that we must pay constant and better attention to species officially designated as “common”. That very designation can deny unique New Zealand animals and plants the rigorous study they deserve while we remain ignorant of whatever trouble they may be experiencing in either numbers or geographical range. Both matter. Ask a käkäpö.

I see Springbok mantises nearly every day. On that rare occasion when I see one of our natives, my heart sings.

I want to see more. I want New Zealand to win.