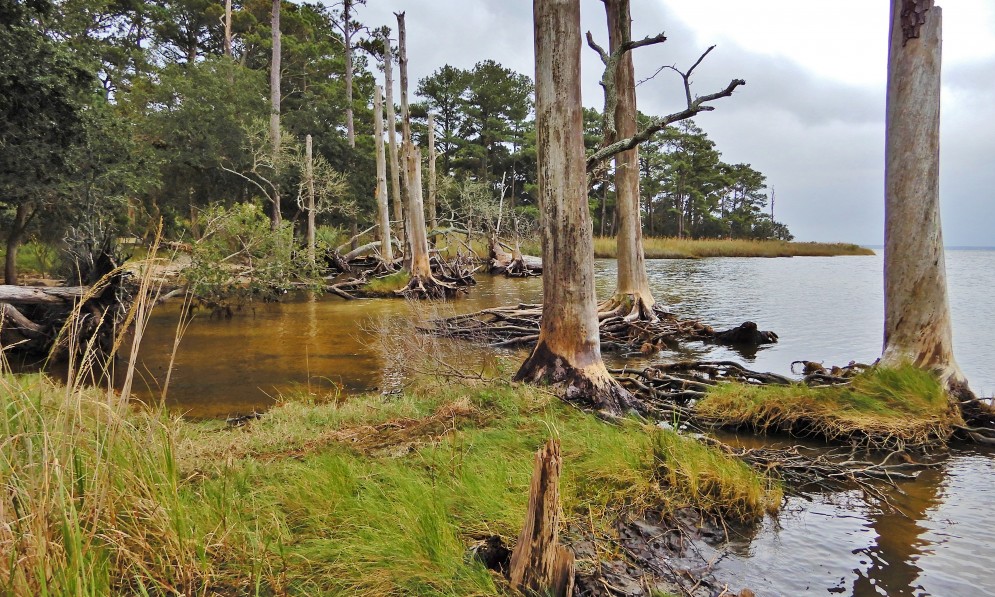 Rising sea levels have led to “ghost forests” in the USA, such as this one at Nags Head Woods, North Carolina. Image NC Wetlands

One of the hardest things to grasp about climate change – on both an emotional and intellectual level – is that the devastating consequences are already locked into the system.

This is not an excuse for throwing up our hands in despair, but it does mean we need to face up to facts and deal with adaptation as well as mitigation.

When climate change occurred in the past, it was often possible for plant and animal populations to shift their distribution so that they could stay within their comfort zones.

Humans changed all that. Less than a quarter of the planet’s landmass remains as wilderness, which is often highly fragmented. Cities, highways, and farmland all present formidable barriers to the movement of wildlife. 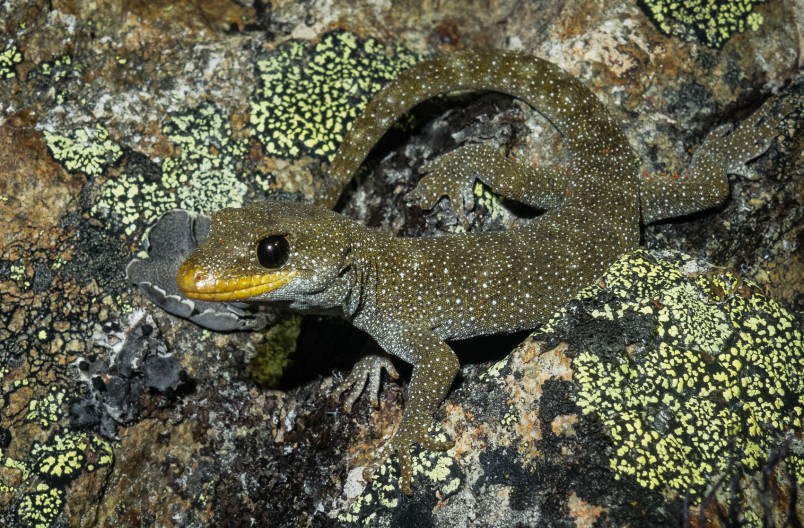 Alpine lizards such as the black-eyed gecko may need to be translocated in the future to save them from extinction in the face of global warming. Image Carey Knox.

If we can’t reverse the relentless human impact on natural ecosystems, can we at least offer a helping hand to ecosystems struggling to adapt to climate change? Or are we more likely to just make a bad situation worse?

There’s no shortage of debates around the world about the role of conservation in the age of climate change.

Emily Ury is an ecologist studying the response of North Carolina’s wetlands to sea-level rise. As she travels around her research area, she sees more and more evidence of trees that are dead or dying because of the increased salinity.

Elsewhere in the US, huge swathes of coastal forest from Maine to Florida are succumbing to this insidious effect of climate change. Locally, they are known as “ghost forests”.

A version of this story was first published in the Summer 2021 issue of Forest & Bird magazine. 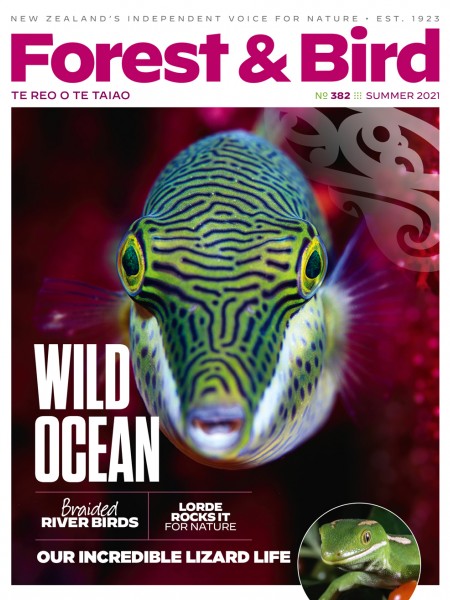 For those who believe we should try to preserve ecosystems just as they are – or were – this strategy goes against the grain.

But if forests are dying anyway, having a salt marsh is a better outcome than allowing a wetland to be reduced to shallow open water, which doesn’t provide the many ecological benefits of a salt marsh, such as storing carbon and enhancing water quality.

Further north, in Maryland’s Plum Creek preserve, thousands of longleaf pine seedlings have been planted, even though the species isn’t native to the US state. They’re part of an experiment to see if human intervention could help the pine migrate north as climate change alters the plant’s natural range.

Some ecologists oppose this strategy, warning of unintended consequences and claiming that “assisted migration” is tantamount to ecological gambling.

Restoration ecologists, however, may believe that plants simply can’t move fast enough to keep up with the rate at which the climate is changing.

Here in New Zealand, translocations are more likely to be carried out to protect an endangered species from introduced predators rather than from the effects of climate disruption.

But that may change in the future. For example, many of our coastal ecosystems, such as estuaries and marshes, are already under severe human-caused stress from sedimentation, nutrient overload, and waste pollution. 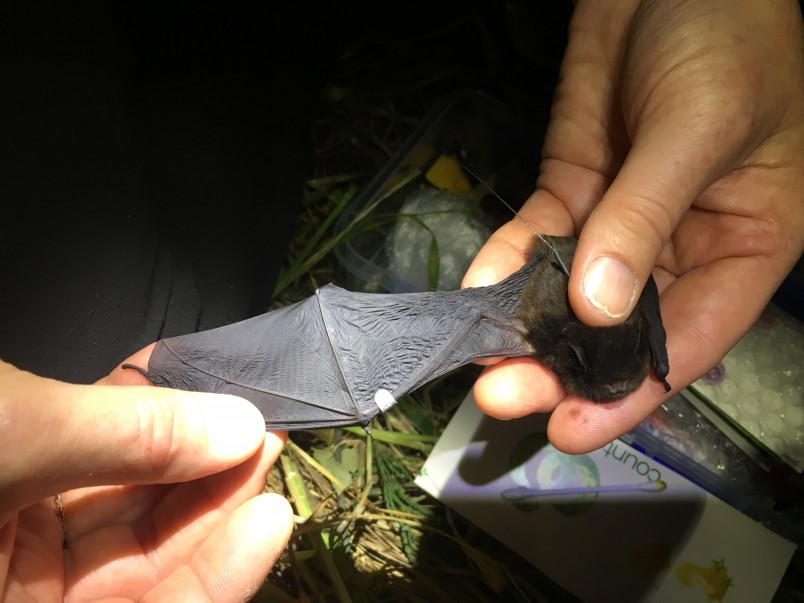 Pekepeka long-tailed bats may need to be moved to cooler areas if New Zealand’s winters keep on warming.

Sea-level rise will result in habitat loss for even more species as humans defend their assets and infrastructure, resulting in “coastal squeeze”.

About half of New Zealand’s freshwater fish species don’t alternate between marine and freshwater habitats. This means that, if river or lake temperatures rise above the animals’ tolerance limits, they are likely to be effectively marooned.

Fish translocations to keep ahead of climate change might become a reality, but the invertebrates they feed on could also be in trouble. Stoneflies, for example, don’t cope well with heat stress, and if they live in a stream flowing through pasture rather than through shady forest then the temperature may reach lethal limits for them.

Terrestrial organisms also face a range of problems because of climate change.

New Zealand bats are unusually active in winter compared with other bats that live in temperate regions. As winters get warmer, they may become even more active and so need more food at a time when insects may be scarce. Translocations to cooler areas might help overcome the problem, at least in the short term. 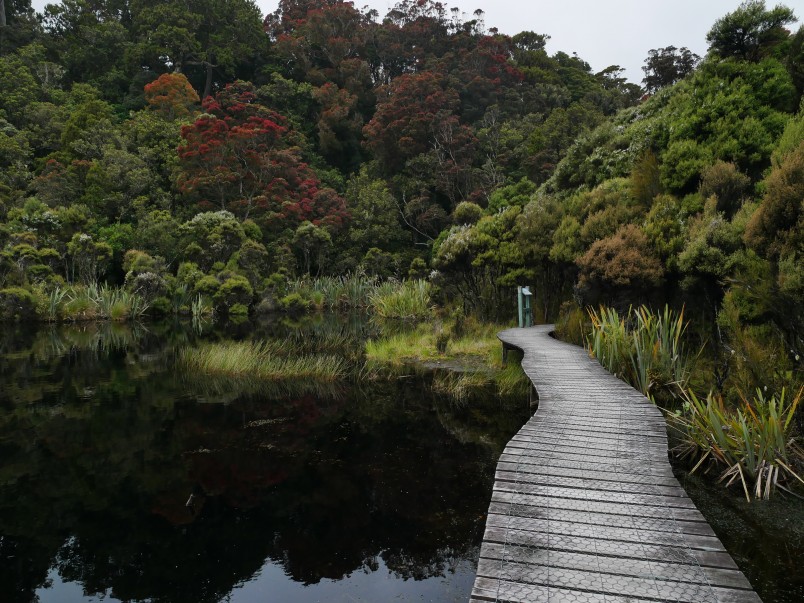 Rare coastal habitats such as Lake Wilkie’s bog lake ecosystem in the Catlins, Southland, are at risk from sea-level rise. Image Caroline Wood.

The alpine area is a rich source of biodiversity, facing a variety of threats resulting from climate change. An unusual number of New Zealand lizard species are cool adapted, including the black-eyed gecko, whose habitat is bluffs 1300m–2200m above sea level in the north of the South Island.

At present, the gecko may be safe in its chilly alpine fortress, but as conditions warm and predators inevitably arrive what then?

Translocations in the face of climate change may be band-aid solutions. We can’t turn back the clock. But perhaps a focus on what we stand to lose will spur us into making greater efforts to mitigate the emissions that cause the problem in the first place.

Protecting the whenua
Getting Aotearoa to zero emissions
Urgent next step: Put the ERP into action