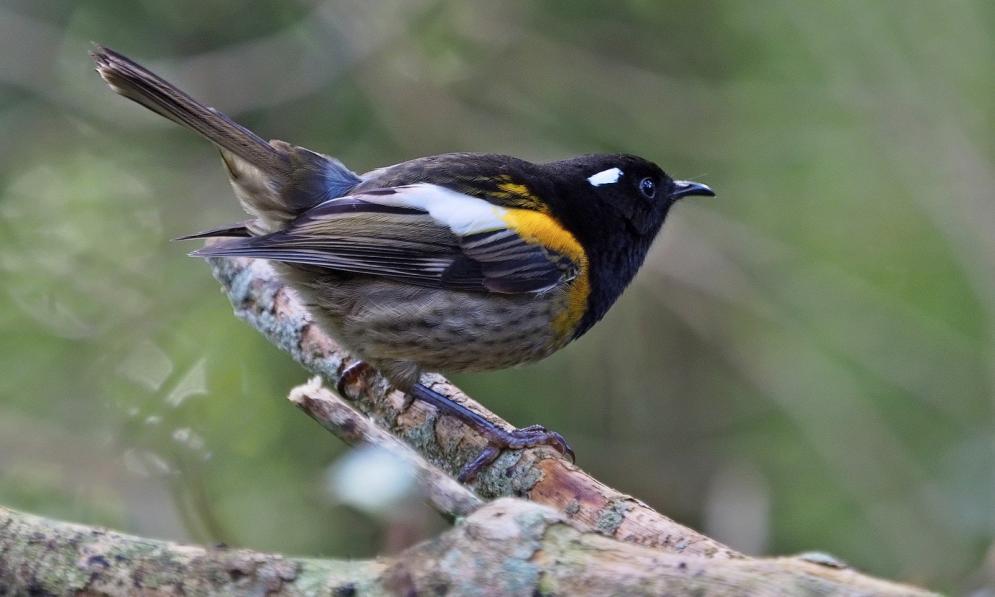 One of New Zealand’s rarest birds is settling in to a new home, thanks to a translocation project at Forest & Bird’s Bushy Park sanctuary near Wanganui.

In March, after three years of preparation, 23 male and 21 female juvenile stitchbirds, or hihi, were released at Bushy Park, making it one of only three mainland hihi sanctuaries nationwide.

The 90-hectare site was gifted to Forest & Bird in 1962 by Frank Moore, a well-known local Hereford cattle and racehorse breeder, and has been managed by the Bushy Park Trust since 1994. The reserve was encircled by a 4.8-kilometre pest-proof fence in 2005.

Hihi (Notiomystis cincta) are believed to be named in part for their alarm call, which sounds a little like “stitch”. The species is listed as vulnerable by the International Union for Conservation of Nature red list.

It is believed there are fewer than 3500 left in New Zealand, with a few small populations translocated to promising habitats in the past 30 years from a single remnant population on Hauturu/Little Barrier Island.

The hihi translocated to Bushy Park were captured at Tiritiri Matangi Island in a week-long operation by a 13-member team from the Bushy Park Trust, Department of Conservation, Massey University, the Institute of Zoology in London and staff from Sydney’s Taronga Zoo.

All the birds had thorough medical checks and were fitted with tiny one-gram location transmitters and an identifying band before being flown to Palmerston North, thanks to Air New Zealand.

Eight of the birds are known to have died since arriving at Bushy Park but these losses appear to be from natural causes and predation by native species so are not cause for long-term concern. All the remaining birds are being tracked within the park’s boundary and many of them have been seen since being released.

"Predation by falcon and morepork presents the greatest challenge to the project as otherwise the birds seen are remarkably healthy and exceptionally tame, maybe too tame for their own good!"

Bushy Park Trust Project Convenor Allan Anderson says: “Predation by falcon and morepork presents the greatest challenge to the project as otherwise the birds seen are remarkably healthy and exceptionally tame, maybe too tame for their own good!”

The Hihi Recovery Group, which has staff from the Department of Conservation, conservation groups and independent researchers, paid for the birds’ transmitters.

The group’s chair, John Ewen, helped lead the translocation. “While small in size, Bushy Park does have a mature forest habitat that we hope will provide the establishing hihi population with ample food resources,” he says. “In addition, food supplementation and nesting sites have been provided to ensure we maximise the probability of establishment.”

Allan says: “Previous successful introductions of bush robins and saddlebacks (tïeke) had shown that this sanctuary, with its superb forest, was eminently suitable for playing a role in the recovery of rare and endangered native birds but to contemplate introducing hihi was an ambitious undertaking.

“Not all earlier translocations have succeeded, but with the support of the Hihi Recovery Group, generous funding from a number of organisations across the international scene and enormous input and energy from volunteers, the dream became a reality.

“Of course there were many unanswered questions, since this was as much about research as it was about simply a translocation. For example, would the birds leave the sanctuary? Would they adapt to their new environment? Would they breed successfully? Would public interest in conservation increase should this transfer succeed? And worse, what would be the implications of future species translocations to Bushy Park, if it failed?

“All the news to date is positive and encouraging, some of it even exceeding our hopes and expectations,” Allan says. “It will be several years before we can say with certainty that the translocation has been a genuine success.”