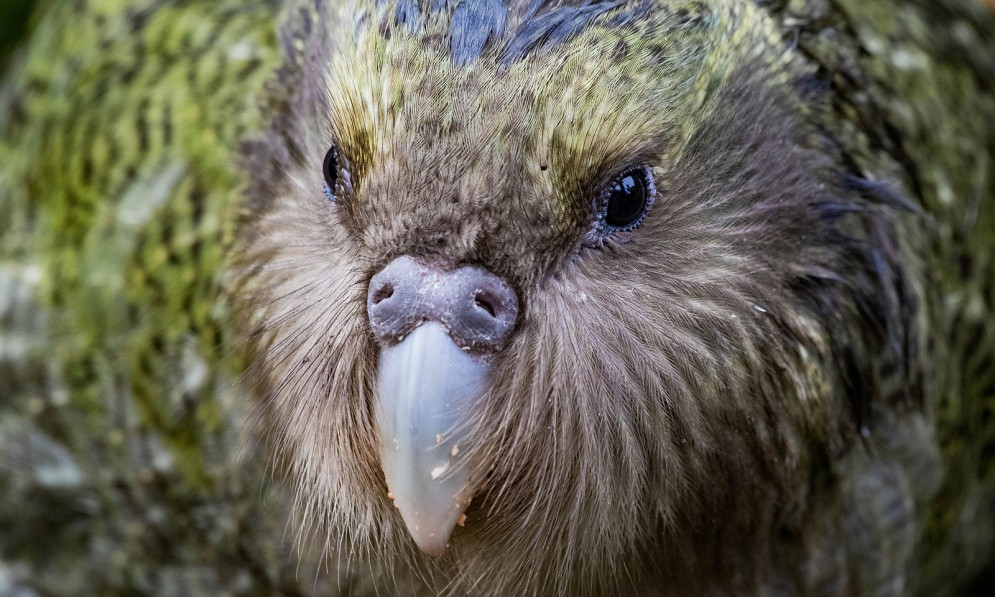 Marina Skinner ventures out after dark to find out what nature gets up to from dusk to dawn.

Entomologist and Forest & Bird President Peter Maddison gathers his fellow night walkers about an hour before dusk to inspect the insect life. Before dark they will usually see a few ants crawling on tree trunks or the odd beetle under leaf litter.

But once dusk falls, the scene changes, as spiders, slugs, tiny snails and cockroaches stretch their legs after a hard day’s rest.

As it gets darker, tree wetas rise from their daytime beds in tree holes and climb to the young leaves and flowers for a midnight feast.

Looper caterpillars emerge from leaf litter and scale the kawakawa bushes to leave their signature holes in the leaves.

Crane flies – which look like winged daddy longlegs – and other insects love humid nights, and they’re even happier if it rains.

Flat worms – some brilliant blue or wild yellow and up to 12 centimetres long – seek out tiny insects to eat. Slaters, or woodlice, ferret in leaf debris.

When humans turn in for the night, many of our wild creatures are just waking up. We hardly ever see some of our native animals because they keep very different hours from us. But break your routine and venture into the bush or explore the coast at night, and you’ll find a whole lot of nightlife going on.

It seems odd to us humans, poorly adapted to coping in the dark, that our wilderness areas can be just as busy at night as they are in the day, but the night’s cooler temperatures, dampness and cover from sharp-eyed predators provides ideal conditions for many native species.

The late bird catches the worm

The kiwi is New Zealand’s best-known nocturnal bird, navigating in the dark with its excellent senses of smell and touch. You’d expect it to have large eyes – like owls – but instead it relies on its nostrils at the end of its bill and well-developed smell centre in the brain.

The kākāpō also forages on the ground at night for fruit and seeds and has a good sense of smell. It is the only nocturnal parrot in the world – and the only flightless one. It’s also critically endangered, with just 91 known to exist.

The large eyes of the morepork (ruru) point to their terrific eyesight. They have large ear holes, too, giving them superb hearing. They are highly effective night-time predators, flying silently and sneaking up on wetas and other insects.

Some native birds are most active at dawn and dusk, including weka, kaka and blue ducks, or whio.

Many seabirds are nocturnal, and some come ashore after dark during nesting and build burrows for their chicks. Little blue penguins also return to land after dark when fewer land predators are around.

As most fishermen know, many sea creatures are more active at night than during the day. Sea creatures that feed at night include sandfish, sea urchins, crayfish, sea worms, spider crabs, seahorses, tube anemones and feather stars and brittle stars – relatives of starfish.

Some fish “slip on their pyjamas” before they turn in for the night. Pink maomao are a bright “Barbie” shade of pink during the day, but when the sun sets they rest on the seabed in paler, mottled nightwear to blend in with their surroundings.

Squid sink to the bottom of the ocean during the day, swimming nearer the surface as night falls to feed on crustaceans and small fish.

Many fish sleep resting on the seabed at night; whales are also night-time sleepers but they rest on the surface. In the 1840s European settlers complained about being kept awake at night by southern right whales blowing in Port Nicholson.

Under the cover of darkness there is a mass migration of microscopic zooplankton, as billions of them rise from the ocean depths to feed on phytoplankton. Sometimes the night-time sea surface sparkles from the “fairy lights” of billions of bio-luminescent plankton.

New Zealand has two different types of bat – the long-tailed and short-tailed bat. They both use echo-location to find their way around in the dark. Long-tailed bats are active between dusk and dawn and venture outside the forest canopy. The short-tails wait until it is properly dark and stick to the forest canopy, feeding on insects, fruit and nectar.

It’s happy hour at Wellington’s Karori Wildlife Sanctuary. As dusk falls, dozens of kaka are toasting each other with sugar water at the bird feeder. They’ll be back at dawn for another shot of the syrup that’s an acceptable alternative to the nectar they would slurp in the wild.

Squawking kaka are the rowdiest creatures visitors hear on a night tour. The dusk songs of hihi, tui and grey warblers are followed by hooting moreporks. We’re not lucky enough to see a kiwi but the shrill call of a male tells us they’re out on this rainy night.

A large female tuatara sits outside her burrow for as long as we care to admire her, but it is too wet for us to venture into the old gold mine where cave wetas hang out.

The highlight of the night tour is venturing through a glow worm wonderland. Their fairy lights twinkle deep into the bush beside the track. There’s something slightly spooky but completely magical about venturing into the forest at night.
• Sanctuary By Night tours are held at Karori Wildlife Sanctuary every night except Christmas Day; tours start 30 minutes before sunset, $55 adults, $30 children, www.sanctuary.org.nz

Glow worms are the glitterati of the bush, though the less-than-glamorous reality is that they’re simply the larvae of flies. Their bio-luminescent glow attracts small insects, which fly into the larvae’s sticky threads hanging from cave roofs or underneath damp banks. The larva pulls in its supper on the line. Females adults keep up their natural glow to attract a mate.

The mosquito’s whine is not a good omen for a restful night, and New Zealand has 16 mosquito species, including four that are introduced. Only the females bite humans and other mammals – the males stick to plant juices.

Powelliphanta snails are not easy to find in the bush, despite their massive dimensions – their shells are about nine centimetres in diameter and they weigh up to 90 grams, the same as a female tui. The carnivorous snails live under leaf litter or logs and are on the move at night looking for earthworms and slugs to snack on.

Many spiders are active at night, with the orb-web spider spinning and repairing its necklace-like web in the dark, and water spiders catching night-flying insects.

Most cockroaches sprung indoors when a light is turned on at night are introduced species, but New Zealand also has about 25 native cockroaches, which are also nocturnal and are even found in alpine areas.
Crickets, our large puriri moths and huhu beetles – and of course our weta species are also all native creatures with a busy nightlife.

Tuatara are in a reptile class of their own. They feed on insects, lizards and frogs at night but sometimes come out of their burrows during the day to bask in the sun.

All four of New Zealand’s native frog species are nocturnal and hide under rocks, logs and plants during the day. They’re not so fond of water as introduced frogs, and three of the species stick to the forests. Critically endangered Archey’s frogs can climb several metres into trees at night to forage.

Many native freshwater fish are nocturnal, probably to avoid birds such as shags and herons. Long-finned and short-finned eels usually hide under rocks or riverbanks during the day and come out at night to hunt small fish, snails and insect larvae using their good sense of smell. Freshwater crayfish, or koura, which live in our lakes and streams, also come out at night to feed.

Out for the evening

Many native plants put on their best show at night to attract the moths and other insects that pollinate them. New Zealand has relatively few native day-flying butterflies, moths and bees, so many New Zealand plants have evolved strong scents to attract night-flying moths. Mahoe, the Easter orchid and some pittosporums have small flowers that are strongly perfumed at night.

Like any master criminal, the most devastating introduced pests – possums, rats, stoats, weasels, ferrets and cats – operate under cover of darkness. They have wiped out entire species during their colonisation of New Zealand, and still endanger many native birds and invertebrates. Even the once-popular night-time garden visitor, the hedgehog, is no longer considered endearing and harmless, with studies showing they eat lizards and native bird eggs on their nocturnal jaunts.