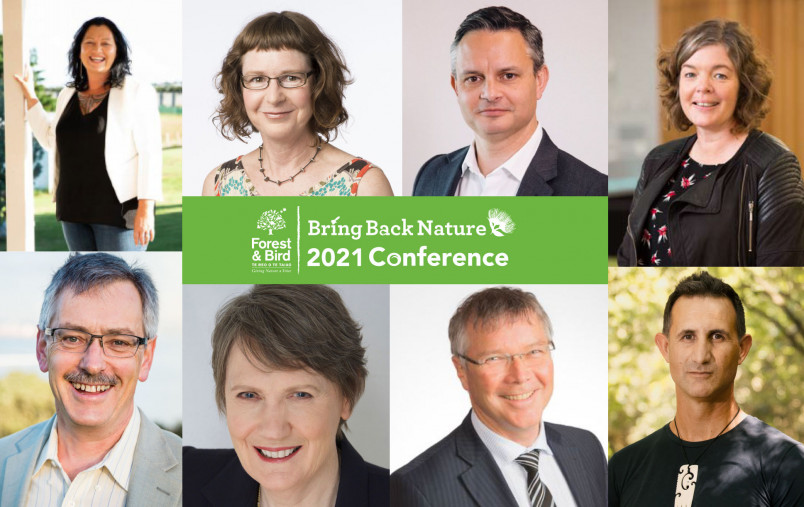 This year's conference will look at bringing back the abundance of the past – an Aotearoa where kākāpō were one of the most common forest birds, and billions of birds nested from the mountains down through extensive forests to the sea.

You can look forward to hearing from leaders and change makers discussing topics like mātauranga Māori, bringing back freshwater, climate change, and the future of our oceans.

The Conference will be held on Saturday 26 June (from 9:15am - 3:45pm), followed by the AGM for members on Sunday 27 June (from 10am onwards).  Download the programme from the link below.

Here's the stellar line-up for this can’t-miss conservation event:

Alison Ballance:  Alison will be the MC for the conference.  Alison is a zoologist, wildlife filmmaker, writer, and radio producer. She is a Member of the New Zealand Order of Merit (MNZM) for services to natural history, film-making and broadcasting. She produced and presented Radio New Zealand's weekly science and environment programme Our Changing World from 2008-2021, and has written 29 books on the natural world in Aotearoa New Zealand.

Rt Hon Helen Clark: Helen Clark was Prime Minister of New Zealand from 1999–2008. As Prime Minister and as a Member of Parliament over 27 years, Helen advocated strongly for New Zealand’s comprehensive programme on sustainability and for tackling the problems of climate change. Helen continues to be a strong voice for sustainable development, climate action, gender equality and women’s leadership, peace and justice, and action on pressing global health issues. She is the editor of the new book, Climate Aotearoa: What's happening and what we can do about it, and joins us for a conversation on climate change and sustainability.

Prof Dame Juliet Gerrard: Juliet is a New Zealand biochemistry academic. She is a professor at the University of Auckland and the New Zealand Prime Minister's Chief Science Advisor. She will be speaking about returning abundance to our oceans based on the recently published report 'The Future of Commercial Fishing in Aotearoa New Zealand'.

Dr Dan Hikuroa: Dan is a senior lecturer at the University of Auckland. His research has focused on Earth systems science, and indigenous knowledge. He joins us to speak about mātauranga Māori (Māori knowledge) and environmental policy.

Sheridan Waitai: Sheridan is Ngāti Kuri and grew up in Te Hiku o te Ika. She has significant experience in legislation and the policy environment in relation to indigenous issues, she has contributed to environmental, social, education and health initiatives. She joins our climate change panel to talk about the importance of nature-based solutions to climate change.

Rod Oram: Rod is a business journalist writing on corporate, economic and political issues. He joins our climate change panel to talk about the importance of nature-based solutions to climate change.

Dion Pou: Dion is a restoration ecologist. He’ll speak on what’s happening at Te Atatu, where there’s a weaving of people together to achieve protection of coastal wetlands, alongside the creation of a marae. He will discuss intergenerational transfer of knowledge about the natural world.

Naomi Aporo: Naomi is the Kaihāpai Māori Senior Leader for the Our Land and Water National Science Challenge and a NEXT Foundation fresh water fellow in Whakatū/Nelson. She joins us to speak about Te Mana o te Wai concept, and putting nature first in the management of fresh water.

Dr Stephanie Borrelle: Stephanie is the Marine and Pacific Regional Coordinator for BirdLife International and a David H. Smith Postdoctoral Fellow. Her research has focused on seabirds, the most threatened group of animals worldwide – with 31% at risk of extinction. She has researched reducing plastic pollution into marine and freshwater ecosystems. She joins our climate change panel to talk about the importance of nature-based solutions to climate change.

Tamatha Paul: Tamatha is a young activist and politician who recently served as the climate change portfolio leader for the Wellington City Council. She was President of Victoria University of Wellington Students' Association. She joins our climate change panel to talk about the importance of nature-based solutions to climate change.

Hon James Shaw: James is the Climate Change Minister and Associate Minister for the Environment with responsibility for Biodiversity. He guided the Zero Carbon Act through Parliament with unanimous support in 2019. He is the co-leader of the Green Party of Aotearoa. He joins our panel discussion on bringing back nature and addressing climate change.

Hon Dr Ayesha Verrall: Ayesha is the Acting Minister for Conservation. She is an infectious-diseases physician and a researcher. She has worked as a senior lecturer at the University of Otago. She will be giving a pre-recorded statement on the Government's vision of conservation in Aotearoa New Zealand.

Hon David Parker: David is the Minister for the Environment and the Minister of Oceans and Fisheries. David has served as Minister of Energy, Climate Change, Transport, State Services, Attorney-General, and Land Information under Helen Clark’s Government. He will join the conference to speak about the Government's recent announcements aimed at retuning abundance to the oceans.

Kevin Hague: Kevin is the Chief Executive of Forest & Bird. Previously, he was the executive director of the NZ Aids Foundation, CEO of the West Coast DHB, and a Member of Parliament for the Green Party from 2008–2016. He lives on the West Coast.