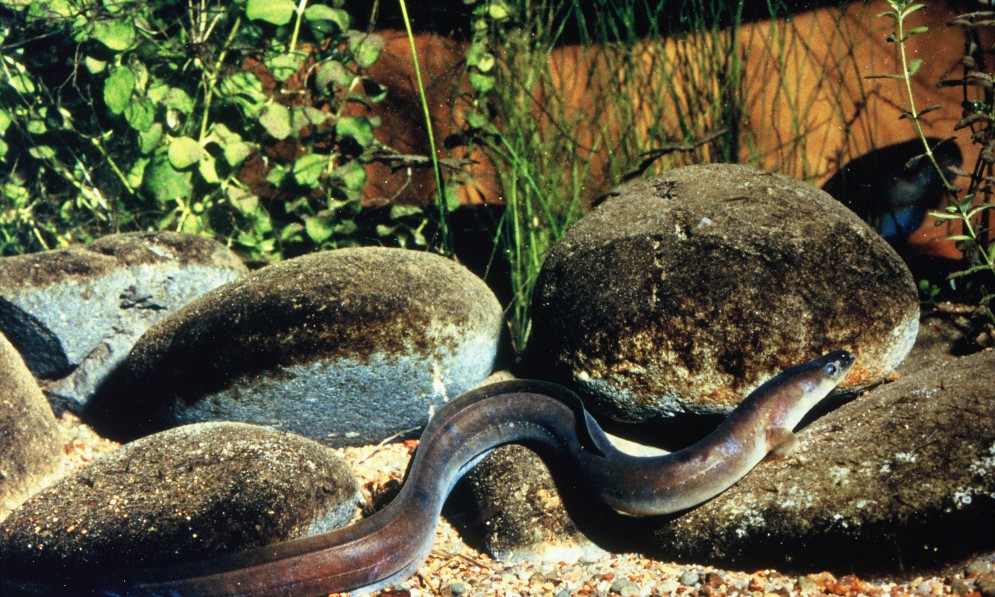 Under the cover of darkness, one of New Zealand’s top predators emerges.

Lack of light is not a problem; it uses its sense of smell to locate its prey. It slips through rivers, streams and lakes unseen, hunting for native galixiid fish, trout, freshwater crayfish (köura) and ducklings.

Long and slender, with a large mouth filled with rows of small, white, sharp teeth, the longfin  eel (Anguilla dieffenbachii, or tuna) is one of the most common freshwater fish in the country’s waterways.

Endemic to New Zealand, the longfin eel, so-named because its dorsal (top) fin is longer than its bottom fin, is probably the biggest eel in the world. Slow growing and sometimes living for 80 years, some females can reach 2 metres long and weigh up to 40kg.

On reaching this (breeding) size, the eels migrate to the sea. The details of the lifecycle are not clear. They swim for up to five or six months to tropical Pacific waters, possibly near Tonga, where they spawn and die. The eggs hatch into leaf-shaped larvae that float back to New Zealand on ocean currents.

Some dams have special eel passes to help them conquer the massive concrete walls. Once at their final destination, the elvers begin the serious business of growing to breeding size.

Longfins are not rare, but very large adults, which are most likely to be fertile females, have become scarce. Commercial fishing since the 1960s has had a significant impact on eel numbers and average size.

Habitat loss and pollution have also had their effects. If you go eeling, return big eels to the water. Watch out – they are slippery customers, quite capable of wriggling overland for long distances. And then there are those teeth...