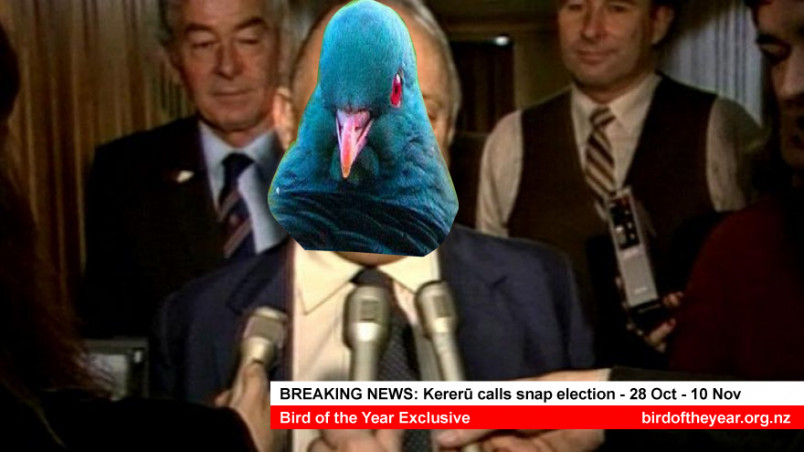 Voting dates have been announced for one of New Zealand’s most hotly anticipated annual elections – Forest & Bird’s competition for Bird of the Year.

For the 14th year, New Zealanders will campaign and vote for their favourite native bird, while learning about the conservation challenges facing our native animals.

Voting for Bird of the Year 2019 will open on Monday 28th October and close on Sunday 10th November. During this time enthusiastic New Zealanders will campaign for their favourite bird using only creativity, humour, and sneaky tactics.

“One of the reasons New Zealanders love Bird of the Year so much is because of the passion, quirky originality, and light-hearted trash-talking that goes into promoting our native birds. Everyone involved has a lot of fun,” says Forest & Bird spokesperson Megan Hubscher.

“Bird of the Year campaign managers are the heart of the competition, and we’re already had several early birds come forward to manage campaigns for this year. If you’d like to campaign for one of our native birds then head along to www.forestandbird.org.nz/bird-year-2019 to register your interest.”

Forest & Bird has got some exciting things planned for this year’s competition, and we’ll be making further announcements closer to the start of voting.

“The kererū flew to an early lead in 2018, and managed to take top spot comfortably with over 2000 votes. But who knows what 2019 will bring? Maybe we’ll see one of our delightful sea birds paddle off with the crown for the first time this year,” says Ms Hubscher.

Bird of the Year 2019 voting begins at 9am on Monday 28 October and closes at 5pm on Sunday 10 November, with the winner announced at 9am Monday 11 November.