Ground zero for the Mackenzie Basin

It’s time to establish a Mackenzie Basin Conservation Park and save its outstanding natural landscapes from further destruction. By Lynley Hargreaves.

In the heart of Mackenzie Country, the road from Lake Tekapo to Lake Pukaki curves through Simons Pass, over the remnants of an ancient glacial moraine – a low ridge of rocks carried by a glacier during a previous ice age. It’s here that most visitors to the Mackenzie catch their first glimpse of Aoraki/Mount Cook, gleaming white beyond the tawny tussock landscape and the turquoise waters of the lake. 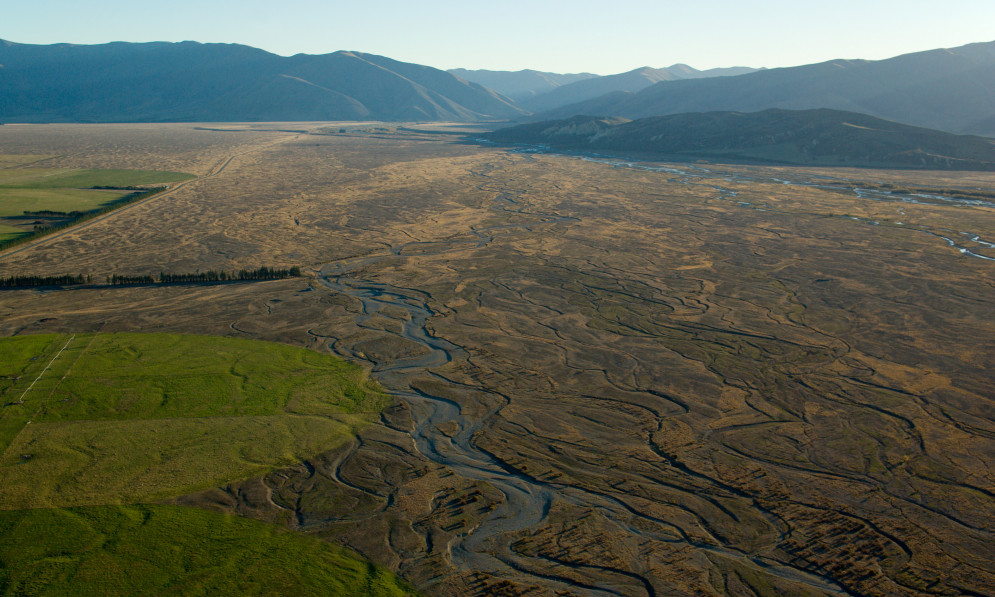 But in early 2018, when I visit, my first view is of diggers at work installing a series of thick pipes. Huge new irrigators sit waiting on the Pukaki outwash plain for this work to be completed. As you read this, the water to those irrigators may be being turned on, the first step towards turning this land into a massive dairy farm. This is ground zero for the greening of the Mackenzie.

To fully comprehend this tragedy, it is necessary to know a little history. Landscape architect Di Lucas grew up on a high-country station. In the 1980s, she helped develop a landscape policy for pastoral leases and coauthored an official publication on tussock landscapes. She was involved in the early 1990s when the entire Mackenzie Basin was first recognised as an Outstanding Natural Landscape – the highest RMA protection that can be given to non-conservation land.

She says authorities, including government agencies and local councils, have failed over many years to properly protect this globally important high-country landscape from inappropriate economic development.

“We had everything in place statutorily, but the implementation at council level failed. Or you’d get significant inherent natural values identified, and then Land Information New Zealand (LINZ), in consultation with DOC, would give consents to cultivate and develop those areas. The people administering the statutes and policies completely failed to apply the regimes,” she says.

In 1990, less than 3% of the Mackenzie Basin floor’s 228,000 or so hectares had been developed. By 2009, 14% was gone. The corridor of land along the road from Twizel to Omarama, once an ecosystem of national significance, had become a corridor of green. That same year, 110 applications were made to take water for irrigation purposes in the basin.

Intensive campaigning by Forest & Bird led to the Mackenzie Sustainable Futures Forum, bringing together farmers, irrigators, tourism operators, and conservationists. By 2013, the groups all agreed to protect 100,000ha of the floor of the Mackenzie Basin for its landscape values.

But little meaningful progress has been made since 2013.

“We did all that work on getting the multi-party agreement, and then the government didn’t implement it. It’s been a tragic, tragic situation,” adds Ms Lucas.

Meanwhile, the greening of the Mackenzie has accelerated. By 2016, a third (33%) of the Mackenzie basin floor – which supports the greatest variety of historically rare ecosystems in New Zealand – had become developed land. Even more is gone today, and more will be lost tomorrow unless the government acts quickly.

“It’s the availability of irrigation that’s driven the loss. Once you put water and fertiliser on the landscape, you’ve lost those values,” explains Forest & Bird Canterbury and West Coast regional manager Jen Miller.

“But it’s also been a perfect storm of privatisation through tenure review, lack of compliance with already weak council rules, and lack of action from the Department of Conservation and Land Information New Zealand.”

One contributing factor is a Mackenzie District Plan loophole that meant that land that had been oversown and topdressed three times in the last 10 years could be cleared of any amount of vegetation without resource consent.

Another is the tenure review process, which has seen many pastoral leases with high conservation values freeholded, with the land going into private ownership. In the Waitaki District, of the land below 900m elevation that went through review, 87% was privatised. Importantly, land below that elevation with significant natural values still wasn’t properly protected – 67% was privatised without constraints on development.

And while land still owned by the Crown is subject to environmental controls through LINZ, Forest & Bird believes the Commissioner of Crown Lands has allowed consents for development that has permitted intensification (greening) where there are identified natural values and, in some cases, where that development conflicts with local council rules.

Take Simons Pass Station. It is currently undergoing tenure review, yet LINZ has already given permission for a large intensive dairy development, including several built structures. The district council loophole allowed vegetation clearance on this land that destroyed much of its natural values. While the appropriateness of irrigation was still being challenged in an Environment Court process, Environment Canterbury granted a discharge consent for up to 15,000 dairy cows without any opportunity for public comment.

“We’re at a tipping point,” says Ms Miller. “This has been the fastest rate of biodiversity loss in New Zealand in the last 150 years.”

The high country has astounding biological diversity. What may look from the road like a fairly uniform tussock landscape is actually a whole array of ecosystems, from wetter in the north and on moraines to drier in the south, but with finely mixed habitats that can vary within a few metres from lush to extremely harsh.

Landcare Research ecologist Dr Susan Walker says the Mackenzie is becoming like the Canterbury Plains – with a disconnect between areas of high biodiversity separated from each other by land that has been irrigated and turned into intensive dairy pastures.

“This will have long-term effects on the viability of creatures that live there,” she says.

“The creatures that live in these environments share a remarkable evolutionary history but have acquired some strange habits – lizards that bear live young, fish without scales, and hundreds if not thousands of endemic invertebrates, many undiscovered,” says Dr Walker.

“This diversity also isn’t obvious because many of the plants have adopted cryptic habits – possibly to avoid grazing by birds. These are often pressed flat to the soil, and grey brown, and that hasn’t helped in identifying them.

“For years and years, people have walked over them and not really seen them.”

In total, the Mackenzie’s tussock grasslands, herb fields, shrublands, and wetlands are national strongholds for more than 60 rare and threatened plant species. The region is an internationally significant breeding ground for endemic wading birds – including the critically endangered kakī/ black stilt and wrybill.

The Mackenzie needs urgent protection in a large landscape-scale continuous sequence. There is a significant amount of land that hasn’t yet been greened and developed that could be protected – largely between Lakes Pukaki and Tekapo, and down to Simons Pass.

“What is left is all there is – this is the only place on Earth where these values are – and with climate change that continuity of ecosystems is going to be incredibly important,” says Dr Walker.

Forest & Bird is calling on the government to create a Mackenzie Basin Conservation Park – something that is already Labour Party policy – as nucleus of wider landscape protection.

We also want to see the Minister of Land Information and Conservation implement a pause in tenure review and any discretionary consents in the high country until a review of the Crown Pastoral Lands Act and the Land Act, and their administration, has been undertaken.

“Management of the high country has reached a critical point with the rate of loss that means opportunities for protecting what remains are now closing,” says Ms Miller.

“The South Island high country is a magnet for tourists. As well as being one of the best star-gazing sites on Earth, the Mackenzie region is the last place where it’s possible to create a dryland park.

“Let’s reach for the stars and protect the Mackenzie Basin from further development. This is the best opportunity in a generation to get it done – all it will take is a bit of courage from the government.”

How can you help?

Write to Conservation and Land Information Minister Eugenie Sage and tell her why you support Forest & Bird’s call for a Mackenzie Basin Conservation Park.