We need to teach our children that native New Zealand is worth fighting for and that pests deserve a humane death. Words and images by Ann Graeme.

It’s a jolly scene. Volunteers of all ages are gathering. Grey-haired retirees and parents with bouncy children load bags of rat bait into their packs. Young and not-so-young people with shorts and muscly legs collect eggs and dried rabbit lure for stoat traps. We, who care about living creatures, are going out into the forest to kill warm, furry animals. This is what conservationists do in New Zealand.

We are so used to this that the incongruity goes unnoticed. We must kill introduced pests if native animals are to survive. Conservation-minded people understand, but it is strange and even shocking to visitors and new citizens from countries where these animals are native species, valued and even protected. 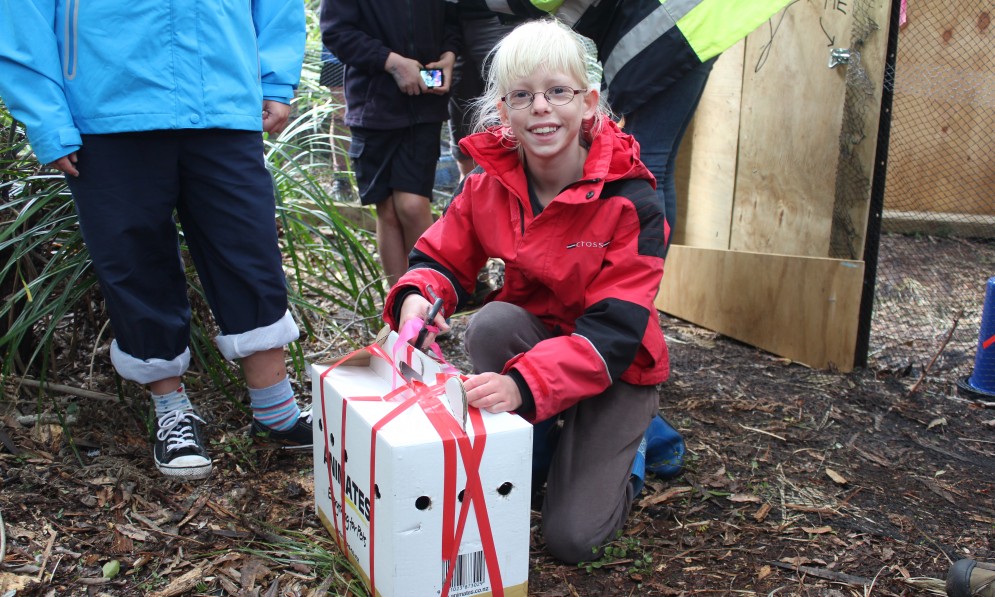 Older, well-loved children’s storybooks celebrate Peter Rabbit, Bambi and Piglet. Remember Beatrix Potter’s Mrs Tiggy Winkle? She was an amiable hedgehog who wore an apron and a white cap with her prickles sticking through it. Here in New Zealand, she climbs trees and eats eggs and nestlings and is the scourge of dotterels nesting near the dunes. These stories endear us to animals, and this is admirable when they are written about native animals in the countries where they belong.

"Our native fauna was adapted to a special country and a special way of living, where it was smart to stay grounded and to scamper under cover of the forest when huge eagles and other birds of prey circled overhead."

But these rabbits, deer, hedgehogs, and wild pigs don’t and can’t belong here. Our native fauna was adapted to a special country and a special way of living, where it was smart to stay grounded and to scamper under cover of the forest when huge eagles and other birds of prey circled overhead. It was smart to be big and flightless and breed slowly. Our country was a place where giant weta and snails, lizards, and birds roamed the forest and fat, flightless kākāpō were as common as sparrows.

But the rules all changed when people came to Aotearoa. They brought furry animals with sharp teeth that hunted at night – rats, cats, stoats, ferrets, hedgehogs, dogs, and possums. Being grounded in the forest suddenly became a handicap. It is an invitation to be eaten. Our native wildlife is ill-adapted to fight or flee from these new enemies, and they stand little chance against night-hunting ground invaders.

The carnage isn’t over yet

It took me some time to realise this. In the 1970s and 1980s, when vast areas of native forest were being clear-felled for pine plantations, the priority for conservationists was to protect the forests. I remember the battles for Pureora, Whirinaki, Waitutu, and South Westland. When protection finally came to the great state-owned forests, I remember our elation that we had “saved the forests”.

And then I remember the chilling realisation that necessary as that victory had been, the fight for survival was not yet over. Kiwi and kākāpō are already gone from many forests, but, if the “tide of teeth” is not held back, we will lose even the commoner birds, like the bellbirds, robins, tomtits, and kererū that define native New Zealand. That is why kind people, people who love animals, go out and trap and poison and kill introduced pests.

Now there is a new momentum. It is called Predator Free NZ and its rallying call is to bring back the dawn chorus. In 2016, the then Prime Minister announced that we would aspire to a “Predator Free New Zealand by 2050”. Since then, government agencies, businesses, communities, individuals, and iwi have taken up the challenge to eradicate small furry animals.

But in the drive to kill pests, we must always remember that it is not their fault that they are outcasts. They did not choose to come here. We brought them from their homelands and – except for the rats – we brought them here deliberately to serve our aims. The fault is ours. We must not lose our empathy with the animals we need to kill. We must never lose sight of the reason we have taken up arms against these introduced mammals and not just count the mangled bodies of squashed stoats or rejoice in the dead rats piling beneath kill traps.

This is the message we must give to our children: that native New Zealand is worth fighting for and that pests deserve both our understanding and a humane death. 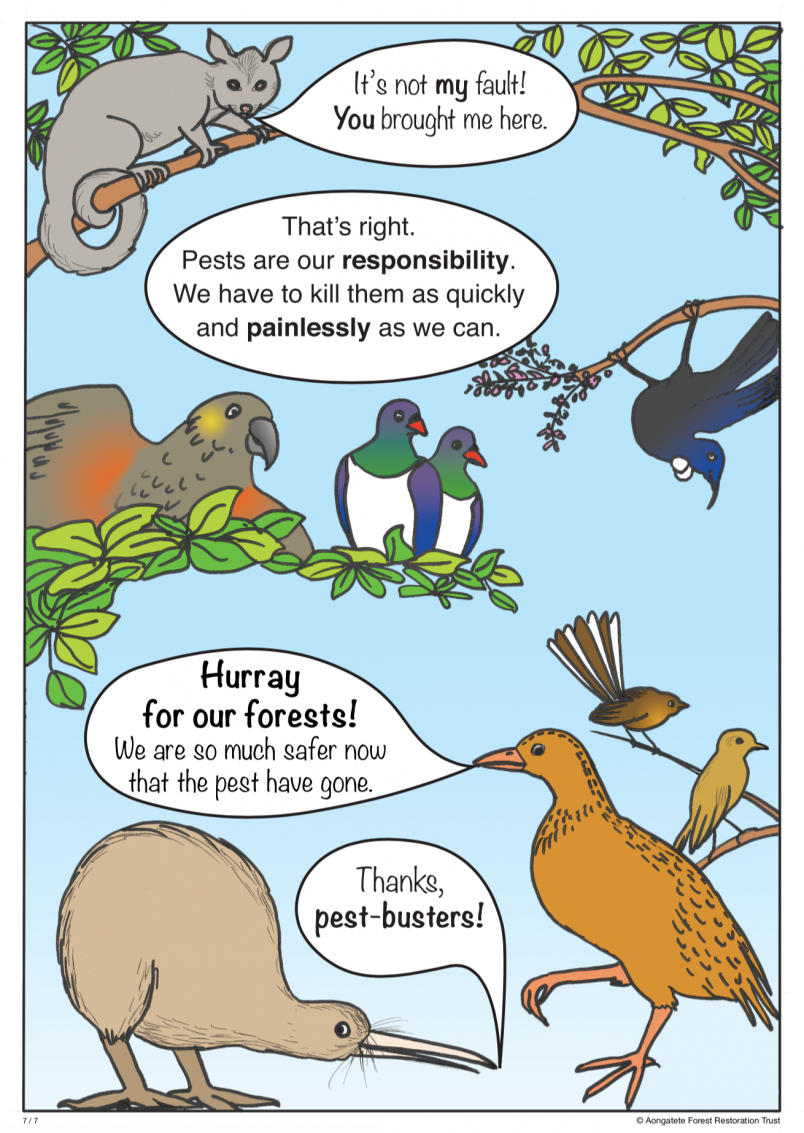 Forest & Bird's Tauranga branch has designed a series of posters to teach children about why killing predators is our responsibility, but how we can do it humanely.

These posters were designed for the Aongatete Forest Restoration Project, in the Bay of Plenty. Set up by Tauranga Forest & Bird Branch and the Katikati Rotary Club in 2006, the project covers 500ha of native forest in the Kaimai Mamaku Conservation Park and is supported by local Forest & Bird volunteers, landowners, and Ngāi Tamawhariua, who have the kaitiaki (guardianship) role over this forest.