In your Winter 2021 Forest & Bird Magazine 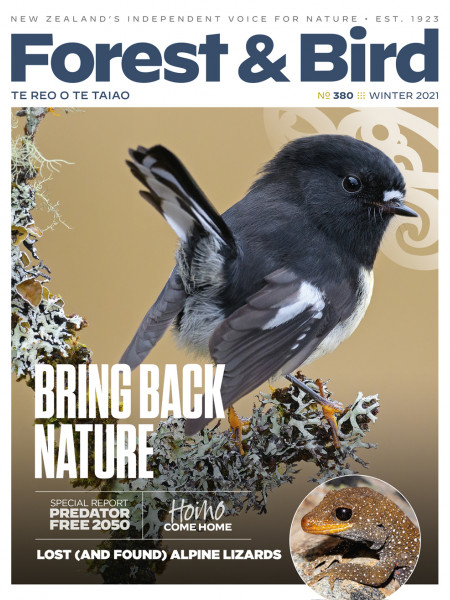 We look at how climate warming and increased predation are pushing newly discovered alpine lizards to the limits of survival. Anna Yeoman meets the team who recently rediscovered the lost awakopaka skink deep in the Fiordland mountains five years after it was feared extinct. Find out how they did it and why it’s a race against time to save the tiny 16-strong known population.

We have a special report by David Brooks about how Predator Free 2050 is tracking five years after the ambitious programme was launched. He speaks to some of the experts involved in ridding the country of rats, possums, stoats, and ferrets to find out what’s been achieved and whether its mid-term 2025 goals are on track for completion.

Over the past 40 years, Forest & Bird volunteers have been caring for hoiho at our Te Rere scientific reserve, in the Catlins. The team has removed introducted predators from the coastal forest so it is safe for the yellow-eyed penguins to breed but once they enter the ocean to feed, they are on their own and at risk from over-fishing and warming oceans. Caretaker Fergus Sutherland explains why six starving penguins had to be rescued and rehabilitated before being safely returned to Te Rere.

We celebrate Forest & Bird’s recent legal win for peace and solitude in Paparoa National Park, find out about Iceland’s top bird, life in a lowland swamp, the fascinating stories behind Māori names for nature, the young winner of a creepy creatures photo competition, and why one of our forest reserves is brimming with birdcalls. All this and much more in New Zealand’s only dedicated conservation magazine!