North Shore branch’s project to restore the native plants and wildlife at a volcanic cone next to the northern motorway in Auckland has been awarded the Golden Spade planting award.

The Tuff Crater Restoration Project in Northcote on Auckland’s North Shore is passed by many thousands of commuters every day. Forest & Bird volunteers have been clearing weeds and planting in the reserve area known as the Millennium Forest since 2000 and in 2009 work started on the daunting task of clearing an area around the crater choked with weeds and replanting natives. 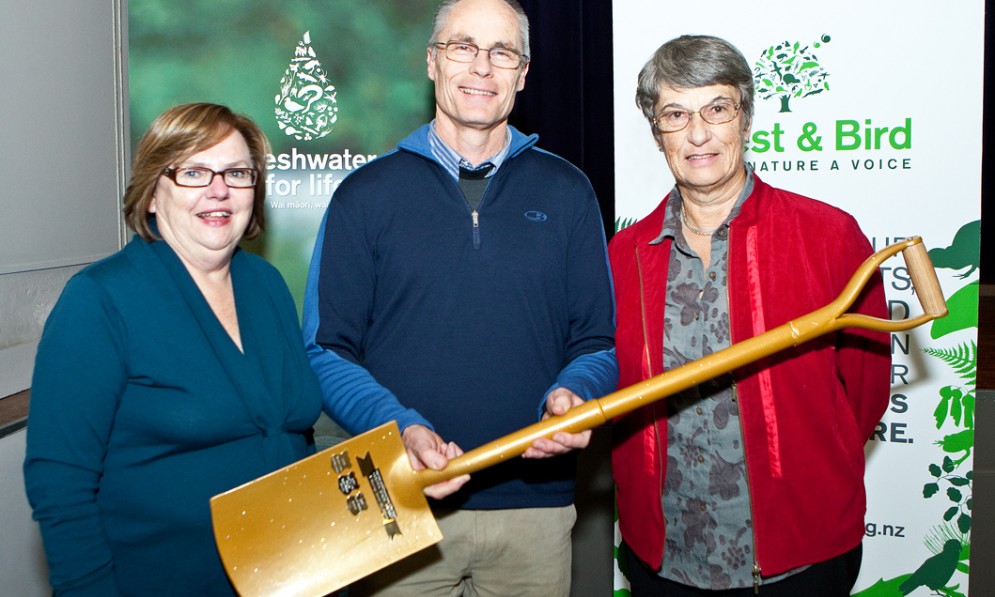 In the past year, more than 3,000 native trees and other plants have been planted by volunteers from Forest & Bird and the local community at the reserve. About 100 people attended a community planting day in June.

The Golden Spade award was presented to Forest & Bird North Shore branch representatives Richard Hursthouse, the driving force behind the project, Anne Denny and Claire Stevens at the annual conference in Wellington.

Richard, the branch chairman, says the project relies heavily on the support of the local community and funders. “With a project like this, we are totally reliant on funding, and you have to have the support from a decent group of volunteers, and we have been able to attract good support from local residents,” he says.

The reserve of nearly 31 hectares has been broken up into eight management areas to be restored over an initial 10-year timeline. The project involves removing vast numbers of weeds, controlling pests and replanting with eco-sourced native vegetation.

The reserve is also part of the Auckland North-West Wildlink, a partnership between Forest & Bird and local and central government agencies to develop a chain of safe habitats and bird corridors from the Hauraki Gulf islands and Whangaparaoa in the east through to the Waitakere Ranges in the west.